"I went to an RWVA Appleseed Shoot.
I was there for the adventure. I was there for the rebirth . . .
Those who can't shoot, have to cook.
Former Cook now becoming a Rifleman.
It feels GOOD . . .
And my mission in life is pass on the Tradition,
the one that started on April 19, 1775. 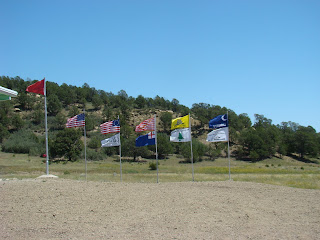 This past weekend, the Rasta Jew and I went to an Appleseed Shoot. The Appleseed Project is sponsored by the Revolutionary War Veterans Association, and has the goal of turning one million ordinary citizens into Riflemen, and to teach them the story of April 19, 1775--the day our nation was born in blood, founded on the skills of the American riflemen who chased the greatest army in the world from Concord back to Boston.
Picture: The flags of our founders posted and the Red Flag signifying a hot firing line at the NRA-Wittington Center, near Raton New Mexico. (Taken August 28, 2010). 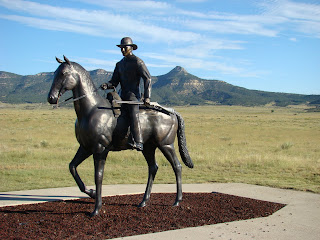 The Rasta Jew and I drove up to the beautiful NRA Wittington Center, the largest and most comprehensive shooting range in the United States, on Friday after school. We took with us two borrowed 22 rifles. Our own rifles take much more expensive ammo, and we would go through 500 rounds each over the course of the Appleseed Shoot.

Picture: Bronze Memorial to former NRA President Charleton "from my cold, dead fingers" Heston as "The Scout" at the the Santa Fe Trail Marker inside Wittington Center, near the Canadian River, outside of Raton, NM (Taken August 29, 2010). 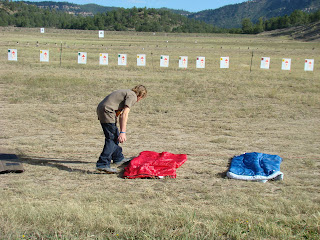 During the Shoot, our home-away-from home was firing line, which was situated 25 yards in front of the first target line. Over the course of two very full days, we learned the fundamentals of the Rifleman skills: safety, the six steps for taking a shot, the Natural Point of Aim (NPOA), and how to shoot prone, sitting, kneeling and standing. The Rasta Jew was a natural, but I improved only slowly, changing rifles twice to solve a few physical problems.

Picture: The Rasta Jew lays out the sleeping bags on the firing line. These will serve as ground cover for shooting prone, sitting and kneeling. (Taken August 28, 2010). 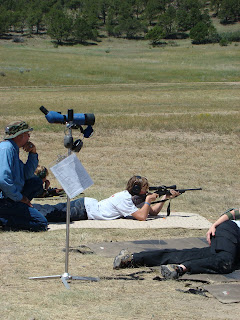 Shooting from the prone position is the most stable, and done right, is both relaxed and beautiful. Sitting is the next most stable, because there is still much bone in contact with the ground. Kneeling is next, and standing is least stable. However, when shooting in real situation--such as hunting--there is no bench, and one may need to shoot in a variety of positions to hit the target. Therefore, a good marksman can shoot accurately in a variety of positions.

Picture: On the second day, they brought out some bigger guns. Here the Rasta Jew shoots an M1-Garand (a classic rifle) at metal targets 200 yards away. Another participant is sighting for him, to let him know how to adjust his aim. (Taken: August 29, 2010).

Appleseed Shoots are intense: the instruction is rapid and then there are numerous drills each day on the Army Qualifying Test (AQT), during which shooters shoot from all the positions, are timed and have to make magazine changes and position transitions. 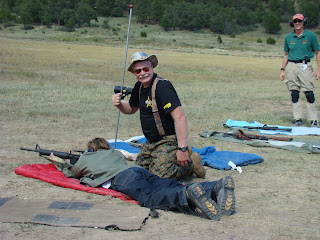 During the breaks and the lunch periods, the teachers take turns telling the story of April 19, 1775. The stories are intended to remind us that those people then thought about us now, and given the choice between slavery and the bullet box, wanted to leave us a third choice: the ballot box. They are intended to get citizens involved in that legacy.

Picture: Navy Chief Bill "don't call me sir" Black teaches the Rasta Jew to fire an AR-15 on the AQT. The Rasta Jew qualified as a Marksman, but did not earn the coveted Rifleman patch this time. (Taken: August 29, 2010). 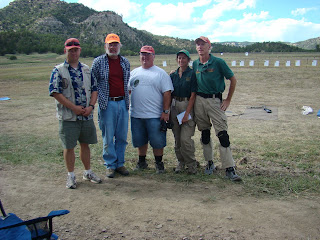 Despite the intensity--the pace was like drinking from a firehose--Appleseed was a great deal of fun. The teachers, who are all volunteers, spent a great deal of time helping each of us one-on-one, and met us where we were at with respect to our skills. Everyone who perservered, went away as a better shot than when they started. As a novice on a rifle, I began with scores in the twenties on the AQT, but by the end I scored a 96, 14 points away from Marksman.

Picture: The teachers for this shoot. The orange hat means teacher-in-training; the red hats are teachers, and the green hat is the Shoot Boss. (Taken: August 29, 2010).

"I am a former cook, becoming a Rifleman. And it feels GOOD!"
And I brought away some insight into the minds of our forefathers who fought the Revolution as well. They were always talking about "posterity." They were always thinking about us. But we are not thinking about our posterity. And when Gill "Bluefeather" (the Shoot Boss) said this, I said out loud, "Maybe that's our problem!"
And one of the other teachers said, "I think you have the secret."
John Adams said this to us:

"Well, Posterity. You will never know what it cost us to preserve your freedom. I only hope that you will make good use of it. If you do not, I shall repent in heaven that I ever took half the pains to preserve it."

The point of Appleseed is not only to make us a nation of Riflemen again, in the Spirit of April 19, 1775, the day our country was born in blood, but also to get us to remember the spirit in which our forefathers preserved our liberty, thinking always down the years to us. And to get us to think about our posterity in the far future with the same care, so that we, too, preserve our liberty. And it was their hope, and should be ours, that their third choice--the ballot box--will be sufficient to preserve it.

Shooting--the only sport endorsed by the Founders--
an American Tradition since April 19, 1775.
Posted by Elisheva Hannah Levin at 6:21 PM