The Articles of Freedom Ceremony at the Roundhouse

They thought we were skinheads. Evidently, the Roundhouse security didn't click through on the links to the We the People Foundation for Constitutional Education, and to the Articles of Freedom website. So our ceremony, in the Rotunda of the Roundhouse, was attended by a few Constitutionalists, and large group of the Capitol Police. Well, perhaps the policemen heard us talking about their Oath to the Constitution. I hope so. At one point in the ceremony, I said:

"How does anyone taking this vow, elected officials especially, reconcile this with the violations that have been committed against our Constitution, and what those violations have done and are doing to America, with effects for generations to come?"

During the ceremony, they did allow a tour group composed for the most part of retirees and schoolchildren to walk through, so by then I imagine that they realized that we are simply ordinary Americans, concerned about our out of control government. 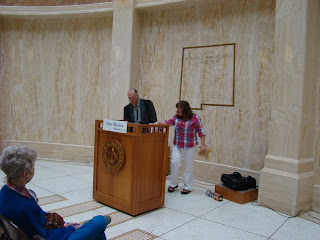 (Here we are getting ready for the ceremony. Michael Lunnon had put our state table marker from CC2009 on the lectern, but the Capitol Security made us take it down. Evidently, there's been some incidents of anti-Richardson signs at the Capitol lately. Wonder why?)

The New Mexico Roundhouse is the only round capitol building in the US, and it looks like a Zia--the symbol on our seal, from the air. New Mexico has the oldest Capitol Building in the US--the Palace of the Governors--built to house the Spanish colonial governor--pre-dates Williamsburg and New England. New Mexico also has the newest, our current capital, the Roundhouse, finished in 1966. 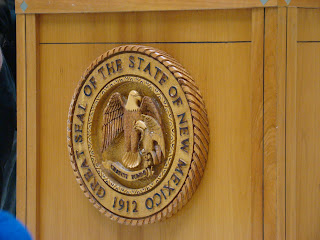 (Picture: The Great Seal of the State of New Mexico was on the front of the lectern. It is an interesting seal because it shows the American Bald Eagle protecting the Mexican Brown Eagle, which has a snake in its beak and an cactus in it's talons; the same Brown Eagle is on the Mexican Flag. The date 1912--the year of our statehood is in Arabic rather than Roman numerals, as the the people thought the Roman numerals were too prententious for us. The Motto--Cresit Eundo--means "it grows as it goes". Although some think it is nonsensical, I believe it fits New Mexico very well.)

Posted by Elisheva Hannah Levin at 8:14 AM

Thank you again for your excellent composition and for your tireless attention to our constitution.

By the way there is a road that travels east and there's still a Starbucks somewhere along the way.

Chuck: Yes, and now that we are done with: the LPNM State Convention, the Articles of Freedom Day, and the NMPA Spring Summit--all of the roads of which took me West and North, I will finally have time to hit my favorite Starbucks--the one at Smith's in Edgewood. I like the people there!

Anon: Cresit Eundo comes from a poem by Lucretius entitled De Rerum Natura,, and the line describes a lightning bolt, growing as it goes across the sky.
New Mexico is Manana land--planning is not our biggest strength. It is the culture of our state that everything is a work in progress. We like it that way--along with the sunshine, and the green chile we are all addicted to--being a work in progress suits us just fine.