Is Les Deplorables the Mark of the Regeneracy?


As those who read my blog and Facebook know, I am a student of the Strauss and Howe generational theory. I find it useful in thinking about what is happening with our beloved America and with us in this last turning of the Millennial Saeculum. 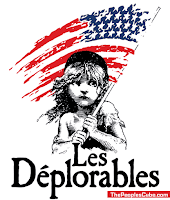 Today I opened up my Facebook and saw an image of the street urchin with the flag from the French Revolution. Except that the flag was the American flag. And under the image the caption read: Les Deplorables. And I realized two things immediately. The first is that election 2016 is the regeneration of the Fourth Turning Crisis. And, secondly, Trump has won the election.

Continuing Obama’s penchant for lecturing the American people about how terrible we are, Hillary made a serious mistake. In her screechy, scolding tone, she called Trump supporters “deplorable.” In other times, Trump supporters might have gotten angry, called names back or complained about Hillary. Not this time. This time, the Trump supporters picked up the gauntlet, and waved it in Hillary’s face. They started to call themselves “The Deplorables.”

The Trump Campaign picked up on this, and over the weekend just past, an artist created a backdrop that looked like this: 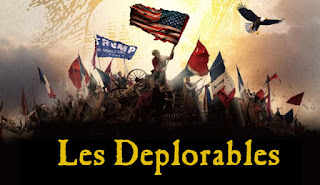 At a rally in Miami, Trump came on stage in front of this image, as music from Les Mis' was played. The audience heard these lyrics:

Do you hear the people sing?
Singing a song of angry men?
It is the music of a people
Who will not be slaves again!
When the beating of your heart
Echoes the beating of the drums
There is a life about to start
When tomorrow comes.

With this performance, Trump has effectively won the election, barring any tragedy or serious misstep. First instead of calling names as Hillary did, his followers labeled themselves as Les Deplorables. By using this set from the French Revolution, Trump and his followers cast Hillary Clinton as Queen Marie Antoinette, the elitist who placed herself above her people, scolding them, and calling them names. Like the French queen, Hillary is unable to relate to the people she would like to rule, to the point of calling them “deplorable.”

Following Strauss and Howe’s Generational Theory, what we are seeing here is the regeneration of the present Crisis period, and it looks like it will be revolutionary in nature. At the end of the last Crisis (the Great Depression and WWII), the GI Generation brought in a restorative order, implanting the values regime of the Third Great Awakening period that “began with the Haymarket Riot and the student missionary movement, rose with agrarian protest and labor violence, and climaxed in Bryan’s revivalist candidacy” in 1896. If all goes well, the Millennial generation will implant a revolutionary values regime based on the values of the Consciousness Revolution, 1964-1984, which Strauss and Howe say:
Began with urban riots and campus fury, swpointelled alongside Vietnam War protests and a rebellious “counterculture.” It gave rise to feminist,
environmental, and black power movements—and to a steep rise in violent crime and family breakup. After the fury peaked with Watergate (in 1974), passions turned inward toward New Age lifestyles and spiritual rebirth (LifeCourse Associates, Website Resource Library, retrieved from:
http://www.lifecourse.com/assets/files/turnings_in_history(1).pdf).

In their generational theory, Strauss and Howe describe the course of a Crisis Period. A crisis period begins with a catalyst—some spark, an accident or event in history that changes the general mood of a society and increases its desire for social order. In our case, Strauss and Howe believe the catylist was the global financial crisis of 2008. Once provoked, the change in mood pushes the society toward regeneracy in which events cause members to draw together around some symbol or event and develop purposeful plans to overcome the emergency. This regeneracy creates a mood of resolve which results in actions leading toward the climax of the crisis, which is the moment of maximum danger to the society’s people and their shared values. How the climax is negotiated determines the resolution of the crisis, and the value of the experience—good or bad—determines how the generations who lived out the crisis together will be marked in the future. In our case, Trump’s French revolutionary imagery does not necessarily promise a good resolution. In fact, it may contain a warning.

How a crisis resolves—for good or for ill—predicts the future course of a society and the happiness of its people going forward. For example, the resolution of the American Revolutionary Crisis with victory at war and the Constitutional Convention, created a strong social order and the values of the Great Awakening—individual responsibility and liberty—were successfully implanted.  This created the Era of Good Feelings, a high period that resulted in an energetic westward expansion, inventive industry, and prosperity for the children who had been "rocked in the cradle of the revolution."

Conversely, the Civil War Crisis did not have such a good ending. And so the post-crisis high was not as deep nor as enduring as the Transcendental values regime did not implant well. Strauss and Howe warn that a bad resolution can hurt the generation who came of age in a crisis, depriving them of the characteristics of a hero generation, which leads to an uneasy high. And if a crisis is catastrophic, Strauss and Howe suggest that it could lead to a medieval-like period in which there is no generational change at all, but rather a fixed order and little innovation or industry.

In the case of the French Revolution itself, the climax of the crisis led to Robespierre and the Reign of Terror, complete with a government that murdered its own people at the behest of the mob, an exercise in democide. Choosing the imagery of the French Revolution during the regeneracy of our current, Millennial Saecular Crisis, could be a warning that all is not well with America.

The generation gap between the Boomers and Generation X, and their Millennial children is very wide. The Millennials did not grow up in the free America that there elders experienced. From public school uniforms in their childhood to the social control exerted over them via the drug war, this generation has experienced an increasingly fascistic society (See Goldberg’s Liberal Fascism, 2009). They are now raising the new Homeland Generation in a surveillance state where a missed doctor’s appointment, too many school absences, a freak accident, an unfortunate social media entry, or even a disputed medical diagnosis may result in the government stealing their children into state custody and jailing them as abusive parents.

As we have seen through the messy beginning stages of this crisis, our government has instituted a police state. We have many people in prison for victimless situations such as recreational and even medical use of cannabis, and we have witnessed police shootings of unarmed adults and even children, who do not obey fast enough. Furthermore, we are witnessing the rapid institution of a Surveillance State, and we have seen what has happened to whistle-blowers within government agencies who have tried to warn us about it. These events and institutions have created the beginnings of a revolutionary impulse within the hearts and minds of some Boomers, Generation X-ers, and Millennials.

Should there arise a leader who uses the Millennial impulse to camaraderie and order by instituting populist or even fascist politics that results in revolution, this crisis could climax with our own reign of terror, as the surveillance state is used to create total control over the population. The maximum danger that America may face at the climax of this crisis could be a rebellion gone wrong, resulting in chaos and suppression. However, if that leader is restrained through a revolution in the hearts and minds of the people-- one that successfully implants the values of the Consciousness Revolution Awakening--America would transit the crisis successfully, bringing about still a newer birth of liberty and happiness in a high period that few of us can even imagine.

What will this crisis regeneracy look like? I think it depends on how well we have taught the Millennials about their American heritage and its enduring values. It depends on how much our Boomer elders and we X-ers can discipline ourselves to do what is right and not count the cost to ourselves. Then the values regime internalized during the last awakening period, the Consciouness Revolution (1967-1984), will be successfully implanted in the culture and create the new high period of prosperity and peace following our present crisis. I hope we make it so!

Posted by Elisheva Hannah Levin at 5:44 PM No comments: Links to this post