A Season of Losses and Gains: Part II-Gains

Yesterday, I began the process of catching up with myself after a three-month blogging hiatus. That entry was all about the losses we experienced over that time and how one of them affected my desire to blog at all.  Today, is for the gains. 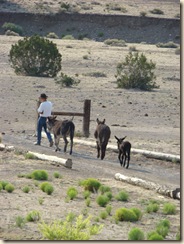 Firstly, we have gained a baby burro. Petunia and Ruger presented us with a little jill, whose picture graces the title of Ragamuffin Studies, so iconic of spring is she. Little Priscilla is watched over by both of her parents, and spends her time gamboling and playing while her parents focus on the mundane activities of getting food and water. Young mammals are a delight, and this one is no exception. She is getting used to our hands, although she does not  take sweet feed from us yet, as her parents do. It is funny to watch her traveling four and five times the distance from the corral to the stock tank than her parents do!

This season has also been one of frustration and growth for me. When I determined that I would never finish my current doctorate studies at all if I continued with a quantitative study, my advisor and I thought about a combined qualitative-quantitative study. This meant I had to learn how to do “qual'”, which requires a very different approach. This spring I took a heavy-duty Qualitative Case Study course with an expert in the field who is also a very demanding teacher. And it very nearly killed drove me to drink. The problems began with coming up with a question, and continued as I tried to shoe-horn a literature I knew well into a question that was very different. Stubborn as I am, I finally saw that my whole approach had to change. I allowed forced myself to write the introduction as a first person (horrors!) narrative that demonstrated how I had come to my question. In the process, I learned how bringing myself into the research itself is one of the characteristics of qualitative research, and I saw how my narrative approach helped not only define the question, but also find the gaps in the literature that my study would address.

I am quite pleased with my research report, although I did revert to the ablative (this was done, that  was shown, etc.) in reporting my results. Still, I gained a new perspective and new tools, two very important things to keep this “grandmother” brain from hardening up to a stultifying degree. And the coolest gain, I saw a theme in the data that I had seen in data during a more congenial (to me) course that I took last spring. And in talking it over with my expert, demanding professor, I realized that this is the theme that will likely occupy me through the dissertation: resistance.

“ Resistance? You’re interested in resistance? Who’d have ever thunk it?” was the Engineering Geek’s somewhat acerbic observation.

The Engineering Geek himself has been working on some important projects for the ranch, and these projects require all of his engineering skills. The whole irrigation system needed an overhaul, having been put in by “rank amateurs” (his words) and used for 18 years. He has been busy designing a manifold for delivery of water, French drains for getting rid of unwanted water, and general improvements to efficiency and design. He is also designing a solar well pump system, and a solar system for the house in order to make us more self-sufficient as “energy prices necessarily skyrocket” as our dictator president promised they would in 2008.

The Engineering Geek has also gotten the first contract for his own engineering firm, NRG Options Engineering, LLC, since retiring from the labs. Since he was apparently more popular with customers than the lab management, it is no surprise that he was requested by one of his former colleagues, and received the contract with no argument from administration. This has been a balm to his battered professional ego, for he never felt truly valued for his work as an employee. It took a long time for the words of our business consultant to sink in: No one will value you like you will. That’s why valuable people go into business for themselves. 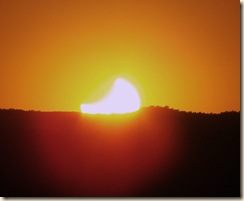 This spring has also been great for observing. The Engineering Geek is also an amateur astronomer, and we have had several wonderful events to observe in our environs. We drove north about 100 miles to observe the Annular Solar Eclipse from the centerline, which passed through New Mexico. We thought we might be a little south of the predicted centerline, but it turned out we were right on it! Two weeks and two days later, we set up on our mesa for the final Transit of Venus in our lifetime. This takes place about once a century in two 8-year apart events. It was exciting to see the shadow of Venus cross onto the solar disc in real time through a filtered telescope, although I will admit that watching the rest of transit we could see from our area was like watching corn grow. Still, it was a once in a lifetime opportunity! (We could not see the Transit of Venus in 2004 from North America).

Finally, our new house-cat came to us on the evening of the eclipse. We were set up at an elementary school north of Gallup, near Yah-ta-Hey, New Mexico. There was a beautiful little kitty there that came around as we were watching the annula. She kept rubbing at my legs, and claiming me as I walked around showing people how to use the filters and the eclipse glasses. (We had attracted a sizeable crowd when we set up our telescope). A neighbor of the school said that she was a stray, so when she jumped into the car as we packed up, what were we cat lovers supposed to do? Of course we stopped at Wal-Mart in Gallup and bought a little cat carrier. Of course we took her to the vet, got her de-wormed, de-ear-mited and spayed. Her name is Moon Shadow (of course!) and she has moved in and brought poor lonely Binky out of his shell. Another gain, brought to us by serendipity!

There is so much more to write about but each of them deserves a separate blog entry! Stay tuned!

Posted by Elisheva Hannah Levin at 6:40 PM No comments: Links to this post

A Season of Loss and Gain: Part I-Losses

I have not written anything at all here since Purim. Part of the reason is that we have been busy with our work on the ranch, and my work with the Gary Johnson campaign, with classes and courses, training and all the business of life. If I had thought that as the children grew up and began leaving home my leisure would increase, I have been shown to be wrong. The days are still just as packed as they ever were, if not more so.

But another, deeper reason is that I have been challenged and tested this spring of 2012 with losses and gains that I was reluctant to write about because I had not yet resolved some of them in my own head and heart, and in some ways still haven’t.

We lost a total of four animals this past spring. The one calf born so far this year, was taken by coyotes, and a heifer died one night for reasons that we will never know, about two months after we transferred her to our partner’s farm on the Rio Grande. These losses caused momentary anguish and questioning, but not the anguish that two others created.

In late January, while we were away, the eldest of 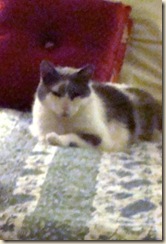 our two house cats died unexpectedly. Cloudy, our most beautiful cat—the one with the unique aquamarine eyes--laid down in his favorite winter sleeping spot and never woke up again. He was found by the CIT, who saw him born 11 years before. It seemed the  circle was closed that night and the next day when we buried him on the sunny south-facing hillside behind the house, under a twisted pinyon tree in view of his favorite window perch.

But the hardest loss by far happened on February 8, 2012. 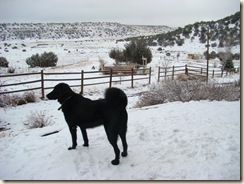 It was a sunny, early spring morning, when I fed the dogs, and as was my habit, hugged Umbrae—our big, black Newfie cross hard so that he would “talk” to me. Later that morning, busy with computer work for a class that I was leaving to attend in Albuquerque, I did not notice that he and Lily had gone on walk-about. When he did not return, I drove the county road looking for him, returning empty to the ranch. After Lily returned, I reluctantly left for two days, hoping that he would return that evening. He never did. And I am left with a huge hole in my heart, wondering what happened to him, and thinking about what I could have done differently that morning. He may have been stolen, he may have been attacked by a wild animal. He may be alive still, and he may not. We just don’t know. And that is the hardest loss of all. As I drive around the Red Hill area, I still have one eye on the pastures and roads, the hills and the houses, hoping to catch a glimpse of my big, black dog. In my mind’s eye I see him, in the periphery of my vision, dancing on the big rock on the hill above the house.

More than any other reason, I  think I have not posted here for so long because on some level, I wanted to wait for good news about Umbrae. Writing about his loss, I knew, would open up the wound of not knowing, to bring that awful sinking feeling in my gut, the pain of loss that seems unendurable even as it must be endured. And it would make his loss seem final and permanent in my mind.

There have been other losses, but they are smaller, less permanent, more reconcilable. There have also been many gains, some wonderful and amazing, and some small and satisfying. The gains, I think, deserve their own entry and their own honors. Tomorrow.

I have undertaken the discipline of blogging again, as we move into the summer and as I embrace more and more fully this life we have chosen, way out here.

Posted by Elisheva Hannah Levin at 7:06 PM No comments: Links to this post