Hanukkah: For the Miracles

“For the miracles, for the times we were saved, for the mighty acts, for the victories, and for the battles you waged, for our ancestors in those days at this season . . .”

This little statement is sung each night of Hanukkah, following the blessings for the lighting of the Hanukkiyah, the eight branched menorah that we use to celebrate the minor Festival of Rededication, the Festival of Lights. At this time each year, we light the lights to advertise the miracle, to remember what it was like when our right to exist was denied us by rulers and powers, and what it was like to fight for our right to our unique identity among all the peoples of the earth.

It is easy on those nights, as we sing the happy childhood songs about latkes and dreidls, to remember the story about the miracle of the oil and it is easy to forget the reason why we light our lights and sing our songs each year at this season. It is every so easy to sing the Al Ha-Nissim in Hebrew while not thinking about the meaning of the words in Hebrew, and what memories they are intended to bring up for us.

Al ha-Nissim— for the miracles—in the Hebrew do not require a willing suspension of disbelief for our modern sensibilities, because they are not suspensions of natural law. Our G-d does not work that way, rather the Eternal renews the Work of Creation each day, which is a lawful work. A miracle is what human beings can accomplish through the illumination of the fire of the soul, entirely within the bounds of the Universe we know. The miracle that we advertise each year as we light the flames in our windows is the miracle of the flame of the Jewish soul, the continued existence of Jews as Jews against the darkness brought by those who would see it extinguished.

. . . v’al ha-purkan—for the times we were saved—the times that a hero or sage came to our aid, bringing to us a fiery reminder of the passion of our spirit; the strong arm brought to our defense by the passionate love of life and of the way we live it. We have been saved time and again, enduring and thriving in the face of certain destruction. The Hebrew understanding of salvation is not some metaphysical redemption, rather it is a very real and sometimes messy saving of flesh and blood from bondage and destruction.

. . . v’al ha-gevurot—for the mighty deeds—the acts of power and courage that come from the absolute conviction that our unique identity is precious and worth risking our lives to preserve for ourselves and for our children. Every time that we have been pushed up against the wall, we are inspired by the Eternal to resist the darkness and protect the light. That inspiration is the flame that burns small and strong against the cold and dark nothing that seeks to consume it.

. . . v’al ha-nifla-ot—for the victories—the wonder of winning over our foes, the wonder of once again being free to light up our lights against the darkness.

v’al ha-milchamot—for the battles that you fought for us . . . Make no mistake, miracles and salvation, mighty deeds and wonders do not come without a price. That price is the willingness to resist evil no matter the cost. It is the price paid by Judah son of Mattiyahu and his brothers, who resisted

. . . when the wicked Hellenic government rose up against your people Israel, to make them forget Torah and violate your law. You waged their battles, defended their rights and avenged the wrongs done to them. . . .

The price for their freedom to exist was to take up the sword against the oppressor, to wage war against a larger and better equipped professional army, and to win that war against all odds. This price has been paid again and again, by the men and women of the People Israel, from Devorah to Tania Chernova, and from Joshua to Yoni Netanyahu. Some of those who knew they had to fight lived to see the fruit of their courage, and some gave their lives.

Each night, when we light those small and flickering flames that shine against the darkness of winter, we remember them all, the heroes inspired by sages, those who lived and those who died, and those who died only because they were Jews. Against the bright lights of those more numerous and powerful than we, our flames seem small and weak; against those bright lights that last the night, ours waver and go out after a brief time burning. But we light them year after year, because they represent how:

In our own time, a time I thought would never be seen again, the darkness grows against us once again. We see and hear of innocent Jewish children being attacked while the governments of the world are silent. We hear of our laws and customs forbidden in the lands of Europe, while the Islamists riot in the very same streets to demand their law replace the European enlightenment. We hear of a presidential candidate in the United States who has remained silent in the face of the virulent anti-Semitism among his inner circle and his supporters. We hear the Iranian president preach against us war and death and destruction to the sound of thundering applause. And as in the days of the Maccabees, we watch as some of our own people support our enemies and mouth their accusations against us.

The flame of one small candle flickers against the night, and goes out. But the next night it is two, and then again, three, and up to seven the number of Divine completion of Creation; and beyond to eight, the number of human fulfillment of tikkun olam, the Repair of the World. Year after year, lighting light against the darkness, counting up from a single flickering light to an abundance of light is re-enacted, always using small and single flames. They represent the miracles and redemptions, the mighty acts and victories, the battles that the Spirit of G-d that burns within, won for us in those days at this season. And particularly in this time of growing darkness in this time and season, the flames illumine our souls and ignite our courage and warm our hands and faces, preparing us for the time when the few will once again prevail against the many, and the weak against the strong. Not by might, and not by power, but by spirit alone will this once again be accomplished. Another one in the eternal chain of remembrance for which we sing: 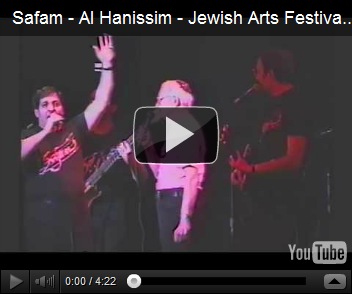 Posted by Elisheva Hannah Levin at 12:09 AM