Chaos is moving at our house. Not far. Just from the dining room to the kitchen 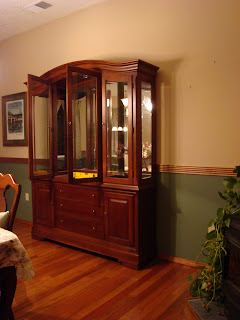 Tonight, Bruce's friend Tom came over because there are two things N. and I cannot help move.

The first is the china cabinet.
It's back in it's place, and they leveled it perfectly! See the yello level inside the main area? 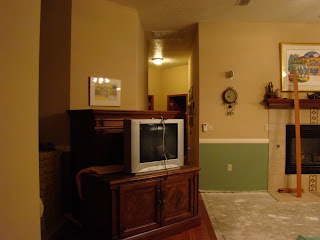 The other thing that is too heavy for me and N. is the entertainment center. It is now in two pieces in a rather incovenient place.
But it was even hard for two guys to move. So it didn't go far. And they didn't put the top on the bottom. This saves them work in a month or so, when the floor is in and they move it back. 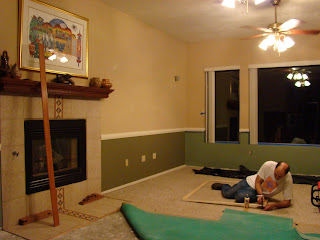 Tonight, Bruce also took a frame that was on the wall. The previous owner had left it and we finally took it off. It was behind the entertainment center before.

Sometimes we're a little slow!
I got the wall under the windows painted. One more part to go--the wall where the entertainment center was! 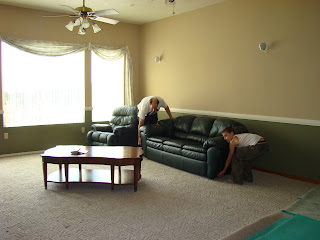 Yesterday, Bruce, N. and I moved the rest of the living room furniture. I painted the wall behind the couch then, too,

N. and Bruce a posing. They had to wait for me to actually move the couch! :)

Tonight, while we ate in haste, the coolest thing happened.
One of the does from last spring came back.
And she brought her fawn and her yearling male. 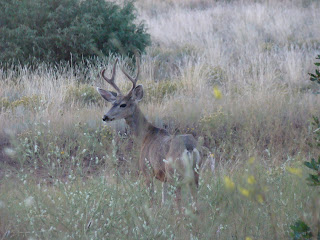 Here's the young man, himself.
He had just munched on the sunflowers by the scrub oak.

Amazing! They were only about twenty feet away from the kitchen window! 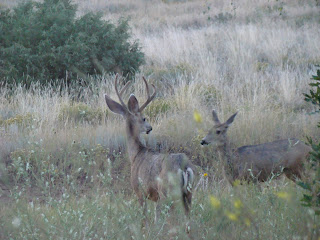 Here are the two together.
Handsome couple, aren't they?

Evidently, they really like our weeds and sunflowers out back.

A storm had just passed, and the foilage was wet and green and juicy.

N. says that the deer often come out between storms in the evening like this.

This time he was right. A new storm is brewing as I write.

Cold air is blowing in and the thunder is rumbling.

Chaos is moving in our house. And that's progress.

But we still have time to enjoy this little bit of G-d's country and the wildlife!