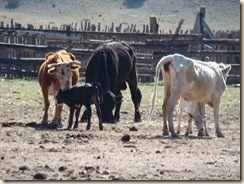 This year we have two calves, one born in June and one in early July who needed branding. The little black one was a little bull, and the white one under her white mother is a little heifer. So last Sunday, with the help of three cowboys—who are calling themselves Adam, Hoss, and Little Joe—we had a branding. 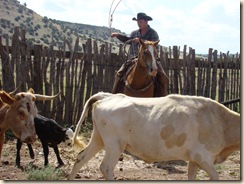 The CIT—who is now ‘Adam’—got the cows together on Sunday morning when we fed them in corral. Except that three were missing. Lucy Longhorn, her steer from last year, and Freckles’ steer from last year. The guys were able to get Lucy Longhorn in, and we figured the young‘uns would come in sooner or later. In any case, we didn’t need them until it was time to dose them up with Ivermectin against parasites. This year’s calves were the stars of the first half. Since he is the most experienced, ‘Hoss’ was assigned to roping. The cowboys had moved the cows into the arena, and there, the roping came pretty easily. Just a few rounds, and the little bull was roped by the hind leg. 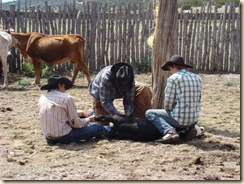 Immediately after he was roped, ‘Adam’ (left) and ‘Little Joe’ (right) ran in to flank him. One took the leg while the other lifted the rope, bringing him down on the correct side. ‘Hoss’ dismounted his, and ran in with the branding irons. Then ‘Little Joe’ cut the earmarks, ‘Hoss’ made the bull into a steer, and ‘Adam’ administered the Black Leg vaccination. After that, the little guy was given a fly tag in the ear and sent back to his mama. The calf was down less than three minutes. It pays to have several experienced cow boys. The little white heifer was down even less time as she didn’t have to be cut. 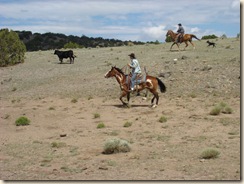 The most exciting part of the day happened after the branding itself. As they were branding, the charlaite (the color of cafe au lait) and the Black steers showed up, wondering what was going on. There was a great deal of mooing across the arena stockade as they greeted the herd and were greeted in return. But the cowboys with the help of ‘Hoss’s’ dogs had to bring them into the chute for the Ivermectin treatment. There was some fancy riding, as ‘Little Joe’ on the Paint and ‘Hoss’ on the Sorrel brought the Black around the corral several times. We got the Charlaite in, but the black ran around the hill. ‘Hoss’ roped him there, and then we treated him in situ. After the job was done, there was only one Rocky Mountain Oyster given to the dog, Tipy, who belongs to ‘Adam.’ Then it was back to the house for hamburgers—from a steer killed in 2011—and a nice cold one for the working boys.

This fall, we will be slaughtering the black steer and the charlaite born in February and March of 2011. In the spring, the little black bull born just before branding last July, will go, unless we decide to sell him as stud. That is the way of life on a ranch. The males are for food, and the females to get new calves.

This month, we will deciding about the direction of our herd. Our bull, Studley Do-right is getting old, and although we have none of his older female offspring here on the ranch, we think he might be getting past his prime. We may need to “ship” him (sell him) and get a new bull. We are also considering reducing this herd, and bringing in a new breed—possibly Dexters—which are smaller and easier for us to handle. This is a weighty decision, and however we do it, we will be saying good-bye to some of our cows. This is also part of ranching. It is not the easiest part, since we have very genteel cows. The matriarchs, Freckles and LB were hand-raised by their previous owner, and they have influenced their offspring.

We are living closer to the realities of life. Meat does not come from the grocery store. It must be born and raised and slaughtered. Animals are raised by humans, and their genomes preserved by humans, so that humans can eat them and sustain their own lives. We are part of it all, and it all happens here, where they are grass fed and grass finished. We thank them for their lives and their contribution to ours. We slaughter them with one stroke of a sharp knife, so that they don’t have time to fear. We treat them with respect.