The Chem Geek Princess called us as we did the walking tour of Albuquerque to tell us that she had just closed on her first house.

It is a foreclosure, so she got it for a song.
It is also an older home at the edge of a reasonably good neighborhood in Albuquerque's Northeast Heights, so with some sweat equity, the CGP should be able to resell it for more than she got it when she decides to get married.

Now, every day after work, and for long hours every weekend, she and her Very Serious Man Friend are doing some extensive remodeling. But by putting in their own work, and buying at bargain basement prices, they are converting their time and frugality into equity that will serve the CGP well. What does the VSMF get out of it? Well, he did say that he thinks it very likely that the house will become one of his rentals.
I was tempted to ask when, but, as the future mother-in-law (I hope!) I wisely refrained.
Very unusual for me. 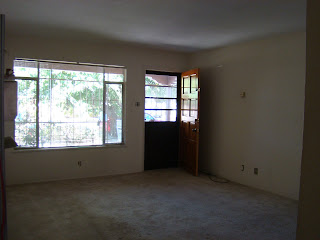 Here is the living room before the remodeling began.

The house was entirely white on the inside, and rather dirty, but it has, as the CGP puts it, "good bones."

The CGP wanted a tree in front and she got that. There is also a grocery store within walking distance, and a very fine group of kids on the block.
The CGP loves children, so when she told the last, I was tempted to say, "So, nu? What about my grandchildren?" But with the VSMF in the room, I bit my tongue and smiled. 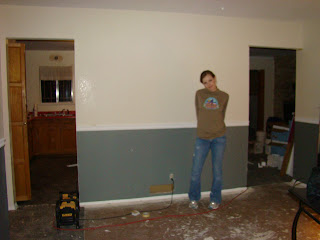 Here is what the CGP and her VSMF did to the living room. They painted the bottom a green-gray slate color, and put a warm cream colored Venetian Plaster textured paint above. They then installed the chair rail.

This picture is taken looking in from the door, because the chair rail was already up there! I need to get a daylight picture of the walls so that the texture is more visible. It is really stunning.

On Thursday, the carpet was not yet in. This afternoon, I stopped by, sans camera, (alas!). The CGP and her VSMF had taken our old carpet--a very good wool berber--and installed it yesterday. They got a good, albeit not perfect, carpet for free! I am currently looking for fabric to make new curtains for my breakfast nook and dining room windows, and the CGP is going to take my old ones for her front room. Again, a penny saved . . . 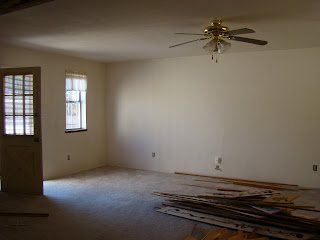 This is the den, before the remodeling began. It is the largest room in the house, and the CGP liked the added space it gives her.

The wood on the floor was on the wall across from the door. Very 1970's. They removed it, and textured that wall as well. The wood is going to be made into a small deck just outside the back door in the picture.
Kids these days are so much more sensible than I was! Why throw it away, if it is useful. 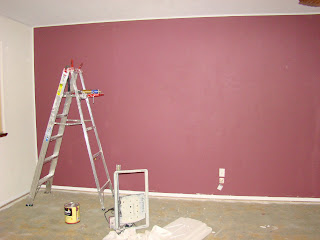 This is the back wall of the den in the midst of remodel. You can just see the window next to the back door on the left.

The deep cherry color really warms up the space, and the nearby walls--a warm cream--pick up a bit of the pink. The carpet was not in there yet, either, but it makes the room look even better.

The CGP moved the ordinary ceiling fan to another room, and installed a garage-sale funky fan in its place. It looks just right for the room. 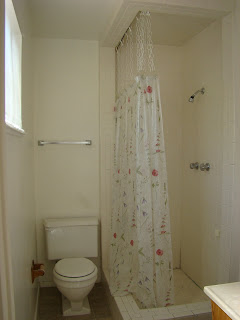 Here is the master bathroom before sweat was applied.

You can see that it is very small and very white. It is really a three-quarter bath, no tub. But the CGP had plans. The VSMF has friends that own one of the local flooring companies. They contract with some of big, semi-custom home builders in town, and they have left-overs. So the VSMF was able to get an MOT discount above and beyond that gained from buying remnants of big orders. 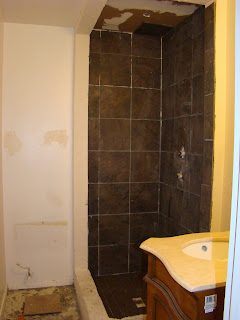 Here is the shower with much of the tile installed. The floor of the shower has complimentary smaller tiles, and is ready for two shower heads: one in the ceiling and one on the wall.
Frankly, I'm envious!
The walls are being painted a very faintly pink cream color, but the new low-flow custom toilet (a floor model from Lowes--$25.00 plus tax, plus a water-bill rebate) has yet to be installed. The tiny new sink fits "cunningly" on the wall opposite. It has a real marble top. Another floor model, the backsplace was cracked. No matter, it can be glued. She got it all for 75% off. That's my girl!

Glass block will be used to fill in the now empty wall next to the (not yet installed) toilet. They will go up to two feet below the ceiling, and a glass door will be installed across from the sink.

Today, when I stopped by, I saw the floor tile. It is tan with a hint of pink, and the CGP had made the VSMF install some of the small shower floor tiles at every-other intersection of the floor. It was a great deal more work, as the VSMF pointed out, so he really must love her! (Which is good for my prospects for beautiful grandchildren). The kitchen tiles (the same) were also being installed, as was the small entry area and the hall.

She thinks she'll be moving within the next two weeks.

I am very excited about the empty guest room at our house. I have plans!

But . . . there's an empty spot already in the making in our house and in my heart.

Children! They grow so quickly.

LOL Good grief, I think my husband is Jewish. :) His time in the Middle-East didn't help, either. He tries to haggle with everyone, and the average store clerk just doesn't know what to make of him.

Congrats to the CGP! Love the paint color.

wow, they are moving right along on the house renovating! Looks like it's going very well, too!

It's a great time to buy, that's for sure. Sounds like a smart couple.

Congratulations to CGP! She seems like a very wise and resourceful young lady, and I bet this investment (of money and more importantly of time and hard work) will pay off richly in terms of her future financial security.

Thanks, everyone, for the best wishes.

A clarification: The house belongs only to the CGP. The VSMF has his own house about 10 minutes away from the CGP's "little house." The CGP is very firm about this. She wants the ring on her finger before she will allow

How wonderful for your daughter! I'm always so impressed by your family's abilities in the DIY realm.

I also wanted to let you know that I've started a new blog. Quite different from the old one, something of a clean slate, shake loose the trolls etc ... just wanted to let a few folks (such as yourself) know.