Solstice: Of a Dark Time and of Clinging to the Edges of Civilization


Today is the winter solstice. Today, in the northern hemisphere, the sun crosses the sky at the southernmost 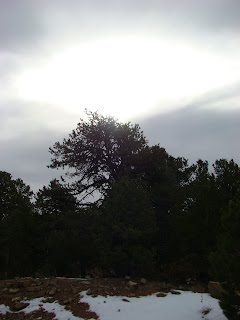 arc, making this the shortest daylight of the year.
We did not see the sunrise, the morning was gray with cloud and white with snow, subdued, except for the stark charcoal bare wood, and the muted ever-greens of the pines and cedars. A rare day in New Mexico, without the southering winter sun in a crystal blue sky, the light, the feel of the cold air, the smell of thawing wood brought me back to my Midwestern childhood. It reminded me of high school, and brought me back to choir and Miss P., who taught us history through the classic Western canon, through the music.

I learned most of my European history through music. I sang in choir and played the flute in band and orchestra. There was something about the music that set the mood of the days and centuries that happened in another place, and another time. I am grateful to this day for this learning of history as part and parcel of the culture of the West.

"Imagine," said Miss P., "That you are an Irish monk, living in a monestary north of 50 degrees latitude, somewhere near the sea. It is December, and it is dark most of the time, and during daylight, snow, fog and clouds make the light gray, and the sky translucent. It is cold, it is dark, and you wonder if the sun will ever return, if the days will ever lengthen, and if you will ever see the light and the growth of spring again. Even though you know it will come, it is hard to imagine it."

And I could close my eyes and see it, feel it, and be there. That imagining let the Senior Choir bring the mood to the music, and to hear the echoes of another time and place, very different in mood and sense from our here and now.

This was one part of European history that I had just learned about that year. After the Roman Empire fell, during the dark ages in northern Europe, when peoples were on the move, and when people exerted all of their energy just to keep the wolves away from the door. And who made sure in those dark times, over those dread winters, that the remnants of that great classical civilization were preserved? In the north, all that was left of the writings of the West was kept by the Irish monks--the ones who in that dark time illuminated the Book of Kells.

And in their religious tradition, they saw themselves as the "remnant of Israel", in exile among the nations, clinging to the edges of civilization. And at this time, during the eight days leading up to the festival of Christmas, their celebration of the return of the light and warmth in the dark, cold of winter, they would gather for Vespers--the evening service--and the hymn chanted then was Veni, Veni Emmanuel. In that dark, cold time of the year, and in those dark and desperate centuries when civilization was nearly lost, they were captive Israel, longing and looking to the light. Waiting for Emanu-El (Hebrew: G-d within us). Here is the hymn, sung acapella, in Latin. (It is here arranged in harmony, not the original chant).

Today, on the Solstice, note especially what is sung here as the third verse that requests the return of sunlight, and the dispelling of shadow and darkness:
"Veni, veni O Oriens,
Solare nos adveniens,
Noctis depelle nebulas,
Dirasque noctis tenebras;"

In English:
"O, Come thou Daystar--come and cheer
Our hearts by thy advent here,
Disperse the gloomy clouds of night,
And death's dark shadow, put to flight."

The Latin is simpler, but the sense of it got to the English, though somewhat forced into the rhyme.

If, as a Jew, I would be inclined to see this hymn as another expression of Christian triumphalism, the doctrine of supersessionism writ large, I remember Miss P.'s history lesson, and understand it differently because of her lyric and imaginative telling of the tale. I remember it is not that; it is the same longing that Israel felt, captive in Egypt, remembering and reaching for light in dark seasons and dark times. And that sense come through, down the years, to this American, living in a culture that has little sense of dark centuries (G-d Forbid!). But we do know here the dark of winter, and desire for the warmth and light of spring, and the reasons that people--in their various ways--celebrate the rebirth of the sun, and the turning of the year during the dark season.

Posted by Elisheva Hannah Levin at 10:19 AM

Thank you for your beautiful post; the photo, thoughts expressed and the video link make a satisfying whole. I may even be persuaded that chant isn't the only acceptable form for this hymn.