Yule: A Week Out of Time

Yule, that's what this week is. Since we don't celebrate Christmas, I had not thought of it this way before. But in the days of the Old Religions of Europe, people took this whole week surrounding the Solstice out of their calendar completely. The days were not part of any month, and they had no number except Yule 1, Yule 2, and so forth. It was literally a week out of time. And peculiarly, this week feels much like a week that has been yanked out of the normal flow of time for us, because we are non-celebrators. All of our normal routines and interactions are blown to the wind, and we have no special rituals to replace them.

This year, the sense of dislocation is even greater. The Engineering Geek retired from his employment at Sandia National Labs on December 23, and we are starting a new adventure in independent employment, Going Galt, as it were, and moving down to our ranch in Catron County. And the move is coming soon, as the Catron Kid (a.k.a. the Rasta Jew) will start his new school on January 5.

Never have I been less prepared for an imminent move. 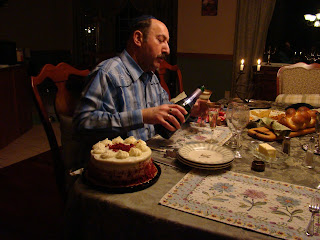 This year, at Erev Shabbat Shemot (Christmas Eve to much of the rest of America), we had a cake and poured Champagne to toast the Engineering Geek's retirement. And the Engineering Geek was finally entirely happy to have retired. And he has finally developed the energy to begin preparing for the move, energy previously being used to reflect on the work he has done and the disappointments of his career, as well as to do the work of actually finishing that work. Although exciting it is also an emotionally laden time.

We went to bed Friday with visions of the work ahead dancing in our heads. On Saturday, however, we woke feeling the need of a leisurely day, for Christmas for the rest of the country is truly a day out of time for us. It is our custom to go to a movie and then have a Chinese dinner. (A movie and Chinese is the American Jew's way of coping with a day in which everyone else is celebrating and almost everything is closed). This year, December 25th fell on Shabbat, so we stayed home and watched The Frisco Kid with Gene Wilder and Harrison Ford and had homemade stir-fry and egg rolls for Seudah Shlishi --the third meal of the Sabbath, usually eaten as night falls).

But this feeling of time out of time, of dislocation, and the short, winter days all mean that we have not been diligent about getting ready, about packing, about all the repairs the house needs so that we can move. Although we are all exciting about the move, there is some trepidation about the challenges of beginning a new life--at our age!--again. And there are the good-bye's to say, the inevitable sadness and sense of loss that accompany such great change.

All of this together has made the 2010 week of time-out-of-time particularly strange. We are all walking around laughing one minute and nearly in tears the next. Moments of panic are interspersed with these other emotions for me, as I look around my house and contemplate just how unready we are to make this move.

Fortunately, for me, when I come back to even keel, I realize that since the house has not yet been sold or leased, and since we want to leave most of our furniture in it while we prepare the house at the ranch for our move, I have some time to get it all going. I really can RESUME. BREATHING. NORMALLY.

Change. It is wrenching, even when it is eagerly anticipated. The adjustment will be made. What I need to do is just allow the whole month of January being about the move.

Email ThisBlogThis!Share to TwitterShare to FacebookShare to Pinterest
Labels: Change, Family Life, Times and Seasons, What was I thinking?

So, I've had a tumultuous year, and am not so very often online as I cannot physically use a computer anymore (but can use my little iPhone), and so had lost track of your blog, but have found it this morning, and am glad to have done so! Blessings on the retirement and the move! Life is overflowing with changes and chances ... We must be brave and have faith, hmm? I hope all goes well with the move and your son's new school and the next step!

~ Ellie (formerly Beth, but I can't remember which I commented as, last, here)