It is the dark of the moon.
Tomorrow evening, as the sun sets, we will end the month of Elul and the year.
At sunset, we will enter the month of Tishrei, Rosh Hashanah 5769--The New Year for Counting Years.

The phases of the moon guide the circle of our Jewish year, and help us mark the times and seasons of our lives. 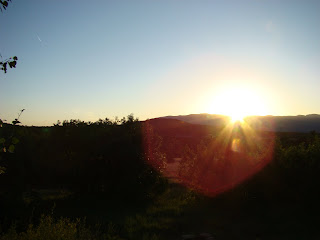 But the rising and setting of the sun, and the locations of the rising and the setting also help us mark the year.
And sunset is the beginning of the day, as it is written:
"And evening came, and morning followed. The first day." (B'reshit).
(Picture: Sunset on the Summer Solstice 2008).
So at sunset tomorrow night, we will begin to celebrate HaYom harat Olam--the birthday of the world. 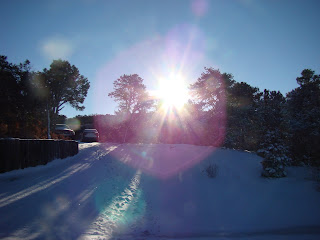 This year, as the gates of time are opened for the Days of Awe, we also enter the year of completion for the Jewish Cycle of the Sun. According to the Rabbis of the Talmud, on a Tuesday evening every 28 years, the sun is once again in the place it was created.
(Picture: Sunrise on Winter Solstice 2007)

Astronomically, the Birkat HaChamah occurs as if the solar year was exactly 365.25 days long, and there were no precession of the equinox--so that the sun is at the same position relative to the plane of the ecliptic--as signified by the mazzarot, the zodiac-- every 28 years on a certain Hebrew day at sunrise. The Rabbis calculated this date according to the short cycle of 19 years for the intercalation of the solar and lunar year multiplied by the long cycle of 28 years to determine the year one for this counting. This 19 year cycle is based on the Saros cycle in which the sun, moon and earth return to the exact same location relative to each other in 18 years and 11.3 days.


This year, 5769 which corresponds to the Solar Western Year of 2009, is a year in which we conduct Birchat HaChamah--the blessing of the Sun.
Like all Jewish ideas, this one has controversy surrounded when this blessing should take place. One Rabbi said Rosh Hashanah--the Birthday of the World (when the sun was said to have been created). Another Rabbi said that it should be on a Tuesday evening in Nisan, the New Year for Months, in the season of Pesach. Since Pesach occurs near the vernal equinox, that is the customary day to make the blessing. This year, it will be on April 8 at sunrise. 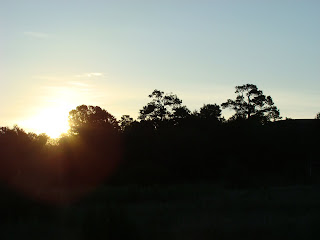 I like the idea of Blessing the Sun at the same time as we mark the Birthday of the World.
Regardless of when we bless, however, this is a special year to mark the central place our star has to the theromodynamics that make for life on our planet, Earth.
(Picture: Sunrise on the May Cross-Quarter, 2008).

Human beings, ever astute astronomers, have used the cycles of the sun and moon to develop calendars. In this way we mark the times and seasons of the year, so that the linear progression of our lives is marked against the circles and spirals of planetary time. 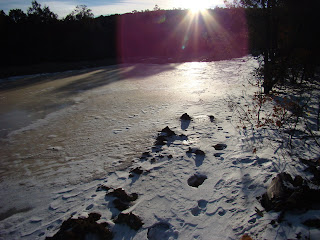 Not only is the sun is the center of how we count time, the Circle of the Year, but all of the abundant energy for the earth's dynamic systems come from our beautiful yellow star of life. Even the fossil fuels we use to warm ourselves in winter are simply ancient sunlight caught up in carbon bonds.
(Picture: Sunrise on the February Cross-Quarter, 2008). 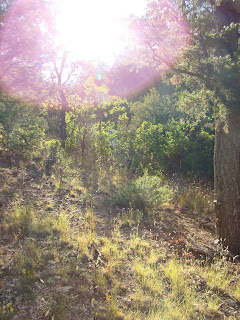 Plants capture photons--quanta of energy--from the sun, and use that energy to bond carbons in glucose,
which is, in turn, burned inside the bodies of all living things, to provide the energy of life.
From fire to matter, matter to fire, so our lives are fueled.
Just as the Creation of the Universe began with the Burst of Energy that propelled the expansion of Matter, more prosaically, it is the energy of the sun that began the earth's dynamism more than four billion years ago, and provided the motive power for the evolution of life on earth.
(Picture: Sunrise on the Autumnal Equinox 2008).

So I rejoice as I mark the mythical Birth of the World this year for having lived to mark the second Birkat HaChamah of my life. Life and the evolution of awareness of life--composed of elements made in stars and pieced together in our bodies by the energy of our Star of Life--how miraculous it is! 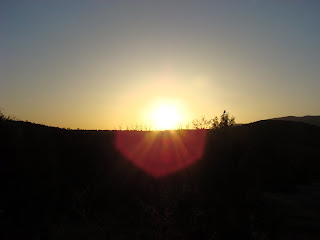 On Rosh HaShanah, we will say the morning blessings including:

"...with goodness the Eternal renews the work of creation continually...Blessed are You, Eternal One, who forms light."
(Picture: Sunset on Autumnal Equinox, 2008).

And in April, we will remember the cycle of sun, saying: "Praised are You, Sovereign of the Universe, who continually renews the work of creation."

And in this new year, I will think of Kohelet: "Men go and come, but Earth abides."

May we all be renewed and inscribed for a good and sweet New Year, as the gates of time open against the seasons and cycles of the years.

I enjoyed your post. Thanks for the explanation and the photos are lovely also.