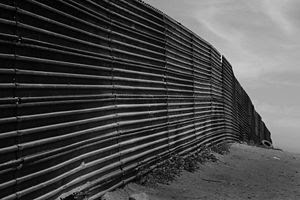 "The fishing boats go out across the evening water
Smuggling guns and arms across the Spanish border
The wind whips up the waves so loud
The ghost moon sails among the clouds
Turns the rifles into silver on the border . . ."

On the Border
by Al Stewart, from Year of the Cat

(Photo taken from Wiki Commons, in the Public Domain)


I have lived in a border state for over 25 years and in that time I have developed a different perspective about borderlands than I might have had when I lived safely in the middle of the United States. To me, the borderlands are places from whence come separations, lawlessness, and more and more frequently, violence.

In the 1980's, during the time of the sanctuary movementin Albuquerque, I briefly sheltered a young woman from El Salvador whose baby daughter was an American citizen by accident of birth. Her mother had been raped by an American while she was trying to cross the border at Juarez.

In the 1990's, I was more and more frequently stopped at Border Patrol check stations when I traveled between Las Cruces (where I did fieldwork at the Jornada del Muerte Long-Term Ecological Research Station) and Albuquerque. There were stops between Cruces and Alamagordo across from White Sands, or between Cruces and Truth or Consequences, depending on the route. In my own car, I was usually waved through, obviously an American citizen, driving while white. But on the occasions when I took the Greyhound bus, the Border Patrol would board and ask for the ID's of every person on the bus. Secure in my obvious citizenship, I would not produce an ID, because citizens are not required to carry ID to travel within the United States. I would instead courteously ask the Agent to show me his ID, which is my right as a citizen who has been detained, even briefly. Once, awakened by a flashlight shining in my face, I started fumbling for my purse until I realized my rights, and asserted them, somewhat testily. The response from the Border Patrol agent was a courteous apology.
And I wondered what it was like for native New Mexicans of Hispanic origin; citizens by birth since the treaty of Guadalupe-Hildalgo, but whose appearance is no different than Mexican citizens. Could they safely assert their rights as Citizens?

At the same time, as the '90's wore on, and the turn of century came, the news of violence across the border grew. The victims at first were young women, disappearing while walking to and from work in clothing factories just across the border. But farmers and ranchers began to talk about the loss of livestock, destruction of their land, and threats against their families from the thousands who crossed the border illegally each year.

As the '90's turned into the 00's, more and more, the news of violence on the border was about the drug-running cartels, kidnapping young women and selling them into prostitution rings, shooting rivals, and harrassing American citizens. As a field researcher, I was strictly warned not to touch any strange packages found in the desert, and to never, ever work alone. Many of us began to 'pack' as we worked in the Jornada and even in the Sevilleta, 5 hours north of the border.I changed careers in the late '90's for family reasons, but in 2004 I learned that most of the LTER research along the border was stopped because it was becoming too dangerous for the researchers.

In the past few years, we have heard of gun battles happening along our border, and the modern Minuteman movement began. The summer before last, the governors of the border states called out the National Guard to assist controlling the border. We have been hearing of beheadings and bodies hung from lightpoles and bridges just across the border in Mexico.

Last year, the Chief of Police from Juarez was murdered before his daughter's very eyes, shot many times with automatic weapons, and the Juarez city officials moved to the American side of the border, for safety. American citizens are being kidnapped across the border in greater and greater numbers, as the drug cartels fight for supremacy, and numerous Mexican states are effectively run by the cartels, and the state governments have been destroyed.

Early this year, we read in our local paper that for all intents and purposes, Chihuahua is a failed state, the drug lords rule there by violence, and the Mexican government has no control over Ciudad Juarez. Gun battles have taken place across the border at Columbus, New Mexico, and gangland style killings have spread across the border into El Paso, Cruces, along our border, and into Phoenix, Arizona. Then a few weeks ago, we read in our local paper that the State Department has issued a travel advisory for the New Mexican border, and that they consider the collapse of Mexico into anarchy to be a real possibility.

A few days ago, I heard a radio host from Phoenix discuss the fact that the most kidnappings in the world take place in Mexico City, but that Phoenix is second, with one kidnapping a day in the past few years. The people being kidnapped are not only drug runners and criminals anymore, either. Many are innocent Americans who are being held for ransoms by drug runners who have lost their loads and must pay for them or face death.
The radio guy said that the Phoenix police are encountered terrible odds, being fired upon by automatic weapons smuggled across the border, and yet they do not even have rifles, and must call for permission before returning fire.

And we wonder what in the world is happening, as the national media does not report any of this.

This morning, I read that the Mexican drug violence has definitely come to Albuquerque. A young man, a drug runner, was kidnapped right here in the East Mountains, tortured, shot and burned, then left in the middle of a road on the West Mesa as a warning.

In an unconnected story, the bodies of young women are starting to be found on the West Mesa, and although we do not know their stories, and it may have nothing to do with the border, it seems eerily similar to the young women who were killed in Juarez all those years ago.

The world seems to be unraveling faster and faster, and for those of us who live in states on the border, the violence seems very close. And yet the political talk during the election seemed to be strangely out of touch with what we know to be the reality.
The economic crisis we are facing in the US is not ours alone, and in fact, it is worse in many other countries, including Mexico. There, the fall of the price of oil along with the loss of renumeration from Mexicans working in the US, means severe economic problems, enough to bring down the government.

And more and more, as I hear the news from the south, passed in our local press, media and by word of mouth, I am reminded of the unsettling words of Al Stewart's On the Border.

"Late last night the rain was knocking at my window
I moved across the darkened room and in the lampglow
I thought I saw down in the street
The spirit of the century
Telling us that we're all standing on the border . . ."

The song seems to be about the rising waves, the winds bringing news of trouble, the growing darkness on the border.

Scary, scary stuff, isn't it? I think people are beginning to become aware--heck, The Huffington Post ran a big article last month about Mexico being out biggest security threat. What do you think about legalizing drugs as a way of defusing things? People say that if you remove the huge profits then things would settle down. I'm not necessarily supportive of this idea, just wondering what you think.

Ima, I am glad to hear that the rest of the country is beginning to wake up. I agree that the War on Drugs is one reason that the border has become so dangerous. I have always thought that we ought to, at the very least, decriminalize drugs. The money combined with the criminalization of drugs has made for some very nasty people getting involved, just as Prohibition did in Chicago.
So I still think that decriminalization is the right thing to do. However, I do not think that alone is going to solve our border problem. We must also be serious about controlling our border, and allowing citizens on the American side to defend their property and lives. We must also empower the Border Patrol agents to stop drug smugglers by force of arms if necessary.

This really freaks me out. We will be moving to border lands as soon as we get a livable space up out there. And my children, it's partly because I want my children to be able to roam.

Our closest neighbor has seen "crossers" on her runs, and said she has never felt endangered. She leaves water out for them in a gallon jug, far enough away from her house, but still on her property.

We see Borer Patrol out there all the time. Once we got out there late on a Friday night and there were four different BP vehicles.

I think I'm most afraid of what you mentioned about kidnappings. We have a weimer/lab mix, but he's not very tough. Maybe we need a tougher dog. And a weapon.

Thanks for the report. I knew that it was bad, but I had no idea how bad.