When we lived in Albuquerque proper, we would have an April Fool's Day snowstorm once in a while. The biggest was on April Fool's Day/Passover/Good Friday in 1988. Even in the city,we saw 5-8 inches of the white stuff. The next day, Shabbat in Passover, it was warm and sunny, as if the snow had never happened.

In the time we have lived in the high country of the East Mountains, we have seen snow showers into May, and have had significant accumulation well past mid-April. But I have not seen an April Fool's snowfall. Until today . . . 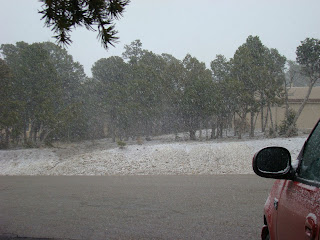 When I got home, the clouds had gathered, and were lowering, and when I got the dogs inside, the snowfall commenced, shortly before 5 PM. 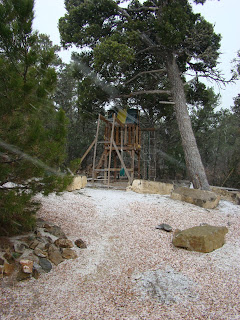 "April fool!" Mother Nature seemed to exclaim,
but the quality of light and the sky and the soft air
made this snowfall seem like an April shower,
all in white. 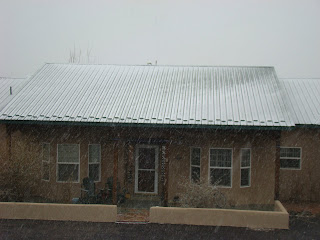 The snow fell fast and furious,
and then the storm passed, as
April showers tend to do.

Now, as I write, the sky is clearing, the sun is setting. It looks like spring in the sky, but on the ground is a small reminder of the season just past.

This feels like the winter that won't end to me. I think part of my Pesach denial has to do with cloudy skies and daytime temperatures not much above freezing. How can it possibly be spring?

Hi, Magpie! I have also been having serious Pesach denial. I just don't feel like it is only a week away. I have gotten a reasonable amount of cleaning done, but only because I scheduled it on the calendar. I think the weather is contributing to it, and my general malaise, which I attribute to being sick much of the winter, and then losing our beautiful dog, Zoey.

Do we need to make up a new term similar to Obamamania but just for Michelle Obama?

I am listening to the praise and opinions of the Europeans on the news right now.

I got my first blogger death threat! Yay me! Someone suggested I eat tainted peanut butter. WAsn't that nice?