DONT TREAD ON ME!
That was the motto of the American Revolution.
The rattlesnake represents an animal that will warn a person with the rattle. It will not strike without warning, but if you tread on it, it will STRIKE.

DONT TREAD ON ME!
Is the warning that Americans are now giving, as they go to Tea Parties to protest the abrogation of their liberty through the collectivist agenda of the pols of both parties, the administration and the courts. We will exercise our RIGHTS.

DONT TREAD ON ME!
Is why Cloward and Piven will not work upon Americans.
We will not acquiesce to the imposition of tyranny. We will defy it!
And a new generation is being taught to defy attempts upon their liberty . . . 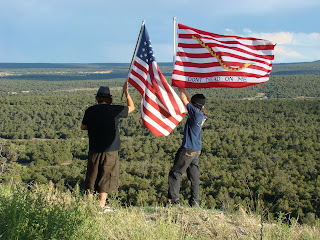 Posted by Elisheva Hannah Levin at 12:12 AM

Last spring, I snuck into a meeting of socialists on campus when they were discussing the health care bill which had just passed. I passed myself off as "undecided" and asked lots of questions. The last question I asked was about the doctors who had put up signs in their offices saying they would not work under Obamacare. I asked the speaker whether he was worried if more doctors would do the same and if they'd have free health care in princple, but a waiting line in practice. Of those doctors, he said, "F**k them. Pardon my French, but f**k them." That's a direct quote.

So just in case you were wondering how socialists feel about the people who refuse to cooperate with socialism on moral grounds....