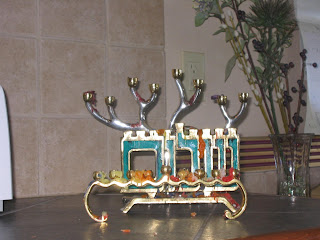 ...But first, the before and after pictures
of the Hannukah Menorot.


To the right is the before picture. You can see the wax built up on them! It could take up to three hours to get this amount of wax off. 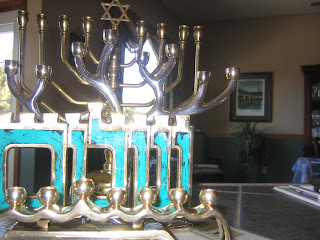 This picture to the right is the "after" picture.
(I did not have my husbands' antique Menorah in the "before" picture because I had already started cleaning it when we came up with the "Miracle of the Oil" solution. It is in this "after" picture, at the back). Don't they look marvelous? And it took about half the time that I have spent in the past. Call it "a miracle of mineral oil," call it "better living through chemistry," but definitely call it labor-saving. 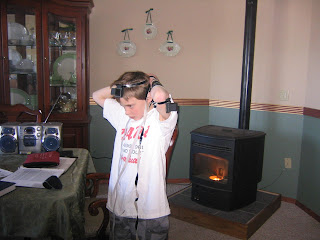 Now, about T'fillin. They are called phylacteries in Greekified English. Or should that be Anglicized Greek? Anyway,T'fillin are leather boxes on straps that adult Jews bind on their head and arm when they pray. The boxes have compartments in them that contain small scrolls that have the Shema ("Hear, O Israel...) and V'ahavta ("You shall love Adonai your
G-d...) written on them. The scrolls are parchment and the verses are written by a scribe.
Here is N. donning his new T'fillin for the very first time in order to pray the morning service.
At his Bar Mitzvah, now less than two weeks away, he will proclaim himself responsible for the commandments as a Jew who can be counted in the minyan (quorum of 10 adult Jews needed to conduct a public service). In preparation for this, he is taking on the commandment of using T'fillin for weekday morning prayer. 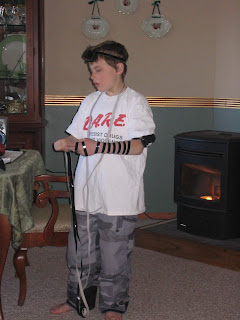 Here is N. reciting the V'erastichli ("I will betroth you to me forever..."), while he winds the strap around his middle finger. Using T'fillin is symbolic of binding oneself to the commandments. It is a physical representation of the desire to bind oneself to G-d, Torah, and Israel through the fulfillment of commandments.

...But to me, watching N. bind the T'fillin has another meaning. It means that a phase of his learning is over. He is growing up and he has the knowledge and responsibility to take on certain obligations of his own choosing. More and more, in the coming months and years, my job as his mother will be to "unbind" him from me so that he can take on the commitments that will define him as a man and a Jew. His education will change, too, because more and more my direction or what will be learned will give way to the interests and passions that will lead him to his adult path. Part of me is "shepping naches" (rejoicing in the attainments of another) about his choice to lay T'fillin. Another part of me is hesitating on the edge of this new thing--my boy growing into a man. This part is hard for me as a mother. "Unbinding" my son from my control cannot be too sudden. He still will need direction and discipline for a while yet. But it must happen apace. I cannot stop him from growing up. In some ways, because I am his mother, N. and I have a destiny that is bound together forever. I will always be his mother. He will always be my son. But the nature of that bond is changing. He was my baby boy, but no longer. He was my "little guy," but no longer. And soon he will not be my boy. He will be my son, the man. Thank goodness I have a few more years to "grok" that one!

Being a mom of boys, I can feel where your coming from here. I'm finding your blog very interesting, learning about all your Jewish customs.