Four Weekends in a Row... 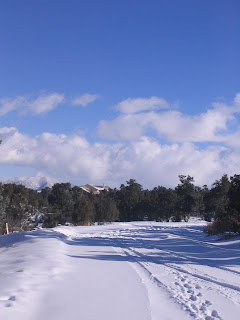 Last night, when I went to sleep shortly after midnight, it was clear above, I could see Orion and Canis Major in the southwestern sky, and the temperature was 37 degrees F.

This morning, I woke up to 2 and 1/2 inches of new snow, wind and a temperature of 15.1 degrees F. Although they had predicted some snow, I thought we had escaped this one.

Look at our street, unplowed, but you can see our footprints as the dogs and I returned from our walk.
South Mountain is gleaming beneath the clouds in the middle left of the picture. 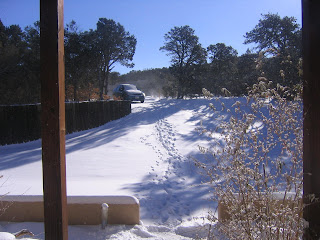 To the right is a picture of the snow blowing at the top of the drive, as we returned from our walk. It was a cold walk, but the front porch bench area was actually warm from the sun hitting the outside wall of the house. I sat comfortably to take off my boots and soak up some rays--but the air temp was well below freezing.
So far, it has snowed here every weekend since December 21st! We really need it, but, oy! the shoveling! I am trying to persuade DH Bruce to get a snow blower. He says we're not old yet and we need the exercise. :)
In other good news, the Bears won today against Seattle, 27 - 24 in overtime. I am not much of a sports fan, but I do follow my Bears and Cubs. So far, the Cubs have managed never to go to the World Series in my lifetime. But the Bears did go to the Superbowl in 1985. They could go again. Along with the Whitesox, the Bears give this Illinois girl some hope.
They still haven't plowed our road, so I took the opportunity of being alone in the house to vacuum the bedroom, wash our bedding and dust and vacuum the living room. Tomorrow, the spring term begins at Los Pecos Homeschool and at the university.
Posted by Elisheva Hannah Levin at 4:33 PM

WOW. We have the most extreme differences in weather. Presently we are all living in the pool or in the air conditioning. Our entire house is air conditioned because it gets so hot here.
We live on the Great Barrier Reef, in the area where Steve Irwin (Croc Hunter) was killed by a sting ray.