Today is the minor Jewish holiday of Lag B' Omer. The word "Lag" is not really a word, but an acronymn for the letters "lamed" and "gimmel," the number 33 in Hebrew. To understand Lag B'Omer, first you need to know what the Omer is and what counting the Omer is.

You shall count for yourselves seven weeks, from when the sickle is first put to the standing crop shall you begin counting seven weeks. Then you will observe the Festival of Shavu'ot for the L-RD, your G-d -Deuteronomy 16:9-10.

Beginning at Pesach time, a measure of barley was brought to the Temple for sacrifice--the sheaf or measure is called an Omer. Every day for 50 days, that measure of barley was waved in the temple. Fifty days is the time between the holiday of Pesach and the holiday of Shavuot. This was the time of the ancient barley harvest in the land of Israel. Now we do not have the Temple in Jerusalem, and most of us do not live in Eretz Israel, and most of us are not farmers, so instead of harvesting the barley measure and bringing it to the temple, we count each day from the second night of Pesach until the day before Shavuot. We call this counting the Omer.

In the days of Rabbi Akiba, there was a plague in the land of Israel, but the plague stopped on the 33 day of counting the Omer. So that day is a happy day in the middle of the barley harvest. We celebrate by going out of doors that day, having picnics, and enjoying a day in the middle of spring. The End.

Back to you, Mom!

The period of the counting of the Omer is a period of semi-mourning in the Jewish calendar. We do not have weddings, parties or dances, or cut our hair during this time. Some say it is because of a plague that occured in Rabbi Akiba's time. Others say that it is because harvest time is a time of uncertainty and work until the crop is safely in. But on the 33 day of the counting of the Omer, the restrictions are lifed and a minor holiday is celebrated by Jews the world over. This is Lag B'Omer. It occurs about a month after the festival of Passover, and a little over 2 weeks before the festival of Shavuot--the Feast of Weeks. It is customary to enjoy the springtime on this holiday by going outside to have picnics and bonfires. Also, it is the anniversary of the death of Rabbi Simeon Bar Yochai, a mystic of old, so in Israel many Hasidic Jews make a pilgrimage to his grave in the Galilee. Also, little boys get their first hair-cut on this day at the age of three.

The agricultural underpinning of Lag B'Omer, as a celebration of the ongoing barley harvest, is akin to May Day in the Old European calendar. It is a time to rejoice in the sweetness of new life and fecundity in the springtime of the year. 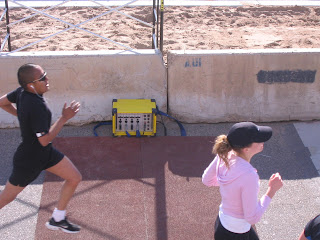 Today we had an outdoors day--on a blustery day in early May--as celebration of Lag B'Omer.

My daughter, MLC, and our daughter-of-the-heart, L. ran the 5K race in the Run for the Zoo in Albuquerque. Here, in the black hat and pink sweatshirt, is MLC crossing the finish line.

She said she has had better time in training, but was happy with her time considering the wind and the crowd. 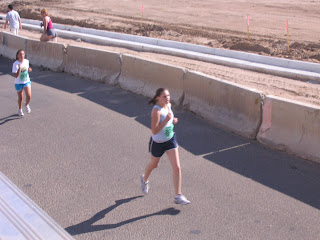 Here is L. coming up to the finish line a few minutes later.

She was also happy with her time.

MLC's boyfriend took these pictures from the media stand for one of the radio stations. The guy knows everybody! 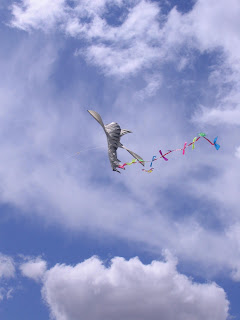 This afternoon, Bruce, N. and I went to the Edgewood Wind Festival at Wildlife West--a wonderful nature park in Edgewood.

It was a wonderful day to fly kites, brisk with a stiff northeast wind.

N. bought "Jaws" at the kite stand. In honor of Lag B'Omer, a day in which the Keshet (rainbow) is also celebrated, he also got a "rainbow" tail to put on the kite.

Here is "Jaws" turning into the wind. 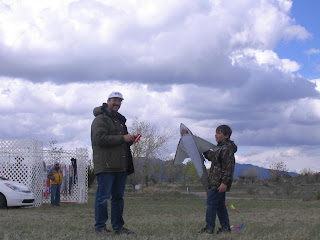 I honestly don't know who had a better time flying the kite, N. or Bruce!

Bruce says that when he was little, he was the Charlie Brown of Oakland. His only attempt at getting a kite into the air ended up feeding a "kite eating palm tree." 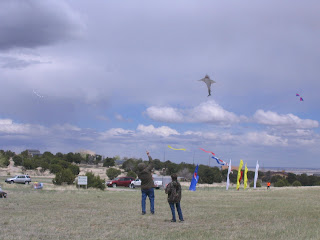 But together, my guys got the kite into the air.
There was a lot encouraging talk and laughter while they did it.

Today the weather was a little strange. Did you notice that MLC was wearing a sweatshirt while running in Albuquerque in May? Do you notice that the guys have winter coats on while flying kites? We actually had snow flurries this morning at our house! But the strange weather did bring good kite-flying wind. So we celebrated a little in the middle of counting the Omer.

It was wonderful to get out and feel the wind and enjoy the new grass smell. And to know that I am done with the semester. Lag B'Omer is one of those wonderful little holidays that take very little planning and have no elaborate preparation. It's just a day of fun in the middle of spring.
Posted by Elisheva Hannah Levin at 6:25 PM

I love reading about your days, Elisheva. You live in such a different environment from us, follow a different spiritual path than we do and homeschool in a different way, yet I always feel a connection when I read your blog.
Shalom,
Lill