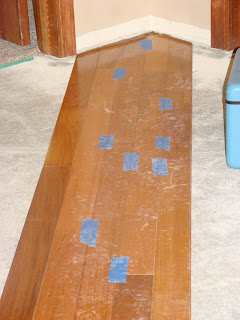 Bruce did work on putting in the wood floors again over the weekend. Although he had great intentions, he did not work on them in the evenings last week.
Monday he took a vacation day to work on the floors, so the week nights consisted of Tuesday through Thursday. Tuesday he was very tired from working late into the evening on Monday. Wednesday he had an astronomy phone/internet conference. Thursday...I can't remember why not on Thursday. And, of course, Friday was Shabbat. 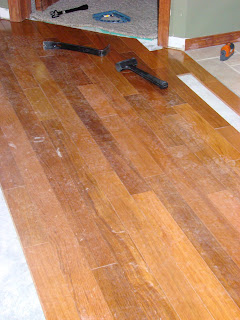 Then came Saturday. He went into town with MLC and I in the morning. It's amazing how often you have to run to the hardware store when you are doing a major project. We dropped him off there on the way to pick up our Harry Potter pre-orders. Then he had to eat lunch. By then he was tired from the morning and took a nap, so he didn't really get started until about 3:30 in the afternoon.
I would have been getting upset--just a little, mind you--but I was deep into Harry Potter by then. Still, he got some of the pieces cut for dealing with doorways.
Sunday morning, Bruce was cutting and laying out pieces by 7:30 AM. But the doorway problem was taking a lot of time. Along the 51 foot hallway that runs across the house, there are five doorways. And for each one, the boards have to be cut so that theyfit under the doorframes. Also, the hallway expands to form a half-hexagon at the bedroom end. It something similar but wider where the living room meets the entryway. This means that boards must be cut at a 45 degree angle to fit the space. 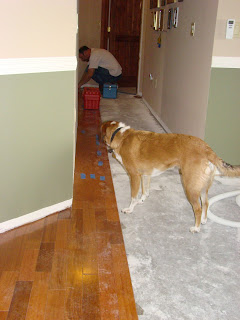 The picture at the top shows how the boards had to be cut to form a point at the end of the hallway between the master bedroom door and my office door. From there, they run straight back for 51 feet to the guest bedroom door, just off the dining room. There are 4 boards, each 3 inches wide. That's about 64 square feet of floor laid.

The second picture is of the boards laid out into the area where the hall expands out toward the entryway. The first 5 boards from the left are continuous with the 5 shown in the first picture. The rest had to be cut at an angle to fit the expansion. The tools are laying right in front of Bruce's office door.

The third and last floor picture shows Lily standing right where the hall starts to expand to the left toward the entryway. I took the picture from Bruce's office door. Bruce is working at the bedroom end. All this work around the doors and in the half-hexagonal areas is taking longer than Bruce anticipated. But it is looking good!

Can you see the dust tracks? I can see I will have to use the dust mop frequently.

N. called this evening and my sister 'Madge' sent me the last Illinois update yesterday. N. will be arriving home tomorrow around noon.

This past week has been very full. On Sunday, he went to Allerton Park. On Monday, it was Lincoln's home and the Illinois State Museum in Springfield. Tuesday it was the Museum of Science and Industry in Chicago. Wednesday, the Field Museum. They took Thursday off, but on Friday that went to Starved Rock and Buffalo Rock State Parks on the Illinois River. Saturday, they went fishing at Dawson Lake. Finally, yesterday and today, they did some "hanging out" which included a lot of skateboarding outside Madge's house in Bloomington.

An 'Aspie" moment occured when I asked N. if he was ready to come home. By tone, I implied 'ready' as in emotionally ready. But he did not hear that:

N: "Almost, but Aunt Madge is still washing some of my clothes."
Me: "But are you really ready for your trip to end?"
N: "Well. And I have to wait until I brush my teeth before I can pack my toothbrush."
Me: "But are you --you know--ready to come home. You know, get into the routine again."
N: "Almost. But I still have to put my little bottles into the zip-lock baggies."
Me: "Okay. Do you feel like you want to come home now?"
N: "Oh! That. Yeah. I want to see my room and my dog and hang out with you now."
Me: "So in that way you are ready to come home, then."
N: "Oh, YEAH! And I took lots of pictures. I even took one of us brushing our teeth. Aunt Madge is gonna burn 'em on a cd for you 'cause there's too many to e-mail. I even got a picture of Tyrannosaurus Sue! And of the U-boat at Science and Industry. And Lake Michigan, too! You'll like all the pictures I took."

Well that's the longest sentence he's said on the phone to me in the past three weeks.
I didn't tell him that Madge had sent a few pictures by e-mail. A very few.

I can hardly wait to pick him up tomorrow.
People said that I'd really enjoy the time alone. And I did. But there was an empty spot at the table.

And in my heart.

Gosh, I haven't been to those places in years, but so many memories of all of the wonderful Chicago museums, the Lincoln home, Starved Rock. I used to hike and camp there when visiting friends in Peoria a lifetime ago.

Those floors are Gorgeous! Your Bruce is very talented.

Sounds like N. has had a very full trip and lots of great experiences. He will have a lot to tell you about!

The floors are looking great, and I'm anxious for N to return home. I bet mom's got a big hug awaiting him.

Welcome home N.
I laughed E at your replay of the Aspie conversation and literal translation of "are you ready."
Thanks for your wonderfully supportive comment to me yesterday. I love you E. I deleted the entry for various reasons but I will catch up with you by email.
My heart is very heavy.

It's a long old trail but you're getting there. They look great.
Cheers