NEARLY WORDLESS WEDNESDAY
And another snow day. But this time, a blizzard.
On Monday morning the weather alert went out. Blizzard warning for the East Mountains.
I went to an NMPA strategy session with Dave and Ray at Ray's house just west of Moriarity. When Dave and I drove back toward Edgewood at 3 PM, it began to rain. By the time we were climbing the east side of Sedillo hill it was snow. By the time I got the truck and went to get the Boychick, Highway 14 and Frost Rd. were snowpacked.
A walk with the dogs at 8:00 PM and there were three inches and still snowing. Then it stopped.
But the blizzard had yet to arrive. At 5:30 Tuesday morning we were awakened by two very bright lighting flashes, one after another, followed by thunder. Suddenly, with two dogs now on the bed with us, the wind picked up and the snow began to lash the house. The blizzard had arrived. By 5:55 AM, we got the SchoolReach call: two hour delay. After walking the dogs a very short distance, we got the second call. Full snow day. The roads kept drifting as fast as the crews could clear them. 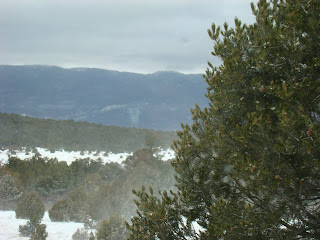 A strong west wind, gusts up to 60 MPH, blows snow across the meadow. On Monday evening, the trees had been beautifully flocked with snow. The wind removed it. 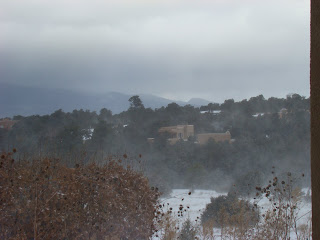 Almost white-out conditions prevailed a good part of the day. The clouds were as dark as rain clouds, but they were producing snow. It was hard to tell sometimes whether it was snowing or just blowing snow. 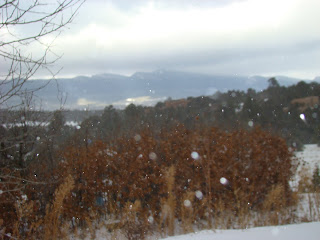 More falling and blowing snow as the coulds raced from west to east; moments of sunshine peeking through were followed by more clouds piling over the mountain front. And more falling snow. 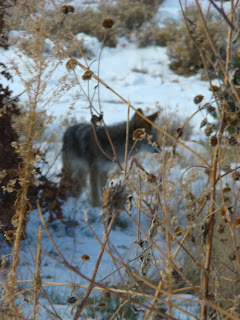 Afternoon, and the snow stopped. The sun was still playing coy among the clouds--now out, now hidden.

And I finally got an answer to my question. Were the tracks in the yard other dogs or coyotes? Definitely coyote.

Here is a young one, down by the scrub oak behind the house. Beautiful!

Tomorrow. Two hour delay because the roads are icy. But we should be able to get out of here.

Tell El Nino. Tell Winter: Let up until after the wedding.

Please? With a dusting of snow on top?

Posted by Elisheva Hannah Levin at 12:15 AM

Love the picture of the coyote -- how neat! I hope the weather cooperates for your wedding travel, and that all goes perfectly on the big day!