Last night when we took the dogs out for their last walk, the clouds had enclosed us, and very large, wet flakes were flying at us out of the west. We came in wet and had to dry the dogs with towels. 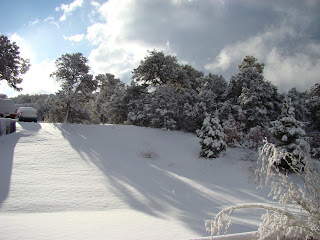 In the middle of the night, I awoke to Bruce saying, "It's snowing, honey."

I reached for my glasses, and it was lovely.

This morning, we walked out to this enchanting scene. Clouds racing across the sky, and about five inches of snow on the driveway. Sunshine and shadow were playing catch with each other across the pristine snow. 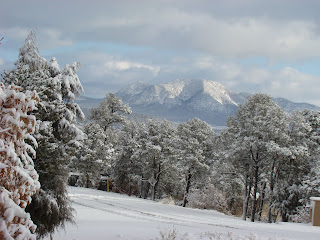 As we walked up Via Sedillo toward the top of our ridge, we looked north to see South Mountain parting a veil of clouds for a momentary chance to shine above the snow-laden trees.

The paper delivery guy had made it down Teypana, and his were the solitary pair of tire tracks on the roads in Rancho Verde. 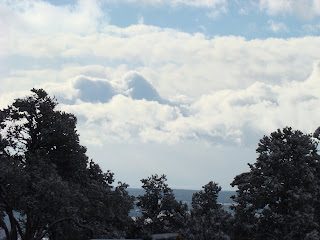 At the top of the ridge, we walked near Cresta Vista, and marveled at the mountains of clouds to the south across the Juan Tomas valley.

Soon after we took this picture, the clouds closed in, and thick fog rolled across the mountain top, and wove around us, cool and wet.

What a changeable, blustery day. 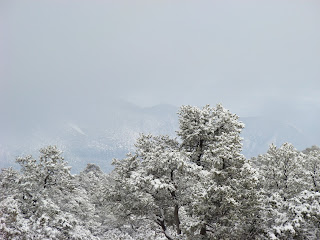 As we descended along Via Sedillo again, we came below the fog.

As we looked to the north, above the trees, South Mountain was once again hidden in the clouds and fog, which swirled around her so quickly, that we could catch only short glimpses of her ridges and trees.

Here again..and gone! A coy game of hide-and-seek courtesy the clouds and wind. 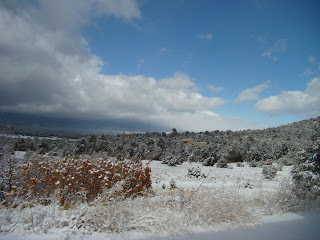 Later, as we ate breakfast, we watched from the breakfast room window as dark clouds again encroached on a clear blue sky.

The frontal boundary that told us that the snow was not going away by noon, as it did last week.

It is one of those days, one where I feel that I must be near the window most of the time, in order to make sure I do not miss anything new that the clouds and wind bring to the constantly changing vistas.

I keep wondering what happened to La Nina. It must be weak indeed, for the storms and moisture keep on coming from the Pacific across the Southwest, like a normal year. Usually La Nina pushes the storm tracks north, and a high pressure gets parked over the four corners, and we have a dry winter and spring. This year, it is not as intense as an El Nino, but we have above average snow cover on the mountains, more like a normal (not El Nino, not La Nina) year.

I am longing for spring weather, but the beauty of these storms--the clouds, the snow, the sudden glimpses of sunlight--is a blessing, too.

And my mantra has become: ...and we need the precipitation. We need the moisture. This was a particularly good snow, too. Wet and heavy, and five inches of it. Marvelous.

So beautiful. What a wonderland.