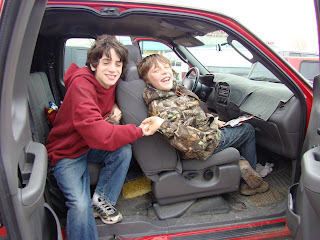 Tuesday was the last day of a long weekend for N.'s friend, A., and the forcast was for a warm but cloudy day. It is February, that time when winter seems to be hanging on forever, and the routine begins to feel unbearable.

It was, in short, a perfect day for a road trip. So we picked A. up at home in the morning and stopped at Smith's in Edgewood for some junk food. That's right, what's a road trip without junk food?

And it was off to the south for a Visit to the Salinas Pueblo Missions National Monument--Gran Quivira Unit--about 70 miles south of Tijeras. Gran Quivira is the most southeastward set of ruins of three Indian villages that comprised the Salinas District of the Spanish Colonial Missions. The Tompiro speaking natives of this village had traded salt from ephemeral lakes left behind when Glacial Lake Estancia dried up about 7000 years ago. They had first come to Chupadera Mesa (south of Mountain Air, NM) between 1200 and 1400 CE, and were then made a Spanish possession in the late 1500's. The first mission church was built in 1630. 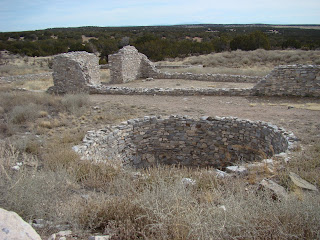 This picture, looking south from the village ruins, is of the ruins of the first church (built 1630) right next to a ceremonial kiva, the center of the Puebloan religion. The boys commented on how odd it must have seemed to the Tompiro natives, to build such a large structure for two men with no wives or families, when the Puebloans, far more numerous, worshipped in the intimate spaces of an underground kiva, and lived in small 'apartment' rooms in the pueblo. 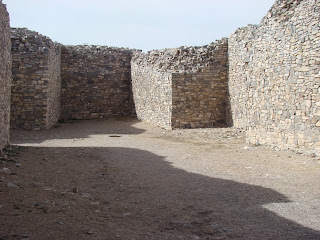 This is the nave of the larger church, built with an attached "convento" in 1670. This church is set apart from the pueblo village, and a little to the northwest, whereas the first church was located right next to one of the larger ceremonial kivas near the village center.

By this time, Gran Quivira was an important trading center for the Spanish, salt being an especially valuable commodity. It was also a jumping off point to trade with the native people of the plains to the east, although missions did not get built among those people, as they were not settled and were also quite fierce in defending their territories. 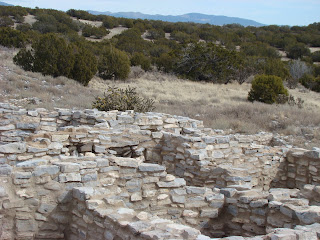 Here are some of the ruins of the Tompiro speaking pueblo, Cueloze, taken from the partially excavated upper village. The boys had a great deal of fun on the upper village, following the maze of walls so that they might identify kivas hidden beneath the peublo 'apartments'. Although the Fransciscan missionaries had tolerated the larger, open kivas and their ceremonies to begin with, they soon forbade the "pagan" rituals practiced there, and the Tompiro who had not joined the new church were forced to hide the practice of their own religion. In 1601, one Marcello de Espinosa wrote:
"There is a sweat room (kiva) painted all over with large and small idols in the same manner that they paint devils here. In the middle are sculpted large idols of stone or wood to which they offer maize...and when they make a 'sacrifice' they all join in a circle to dance..."

The boys asked many questions about theway that the conquering Spaniards forced their religion on the natives, and were quite interested in learning that many of the Pueblo Indians identify as Christians to this day. They speculated about how that compared to the way that near-eastern religions were spread by conquest, and also Christianity to Europe, and Islam to North Africa and Asia. They drew parallels between the hidden kivas, and the conversos, the hidden Jews of northern New Mexico, some of whom retain their hidden Jewish practice to this day. They were very happy to discover that the Katchina dances of the nineteen Pueblos of the Rio Grande are the religion of the Puebloan peoples, practiced to this day. 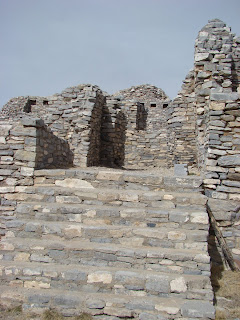 These are the steps of the convento, leading up from the south courtyard and gardens to the common areas and cells. The boys were also fascinated by the windows, which had very thick walls that slanted inward, to make shadows so that the summer sun would not overheat the rooms inside.
N. also pointed out that the shape would work well for defense, with two bowmen able to creat crossfire from either side of the window, and yet remain hidden by the angled walls.

I am often taken aback at how much they have learned about history, about religion, and about warfare without me being much aware of it. In visits to many historical sites in New Mexico, they have learned that the Puebloans, and later the Spanish and then the Americans, had to always be aware of the raiding Apachu--a Tewa word for enemy or thief--the fierce Apache, Athabaskan speakers who hunted the plains and raided the stores of the settled peoples. It was indeed a beautiful day for a road trip,
and at Gran Quivira it was 60 degrees.

Although partly cloudy, the sun did shine on Chupadera Mesa, as we stood above the newly built ramp to spot golden eagles hunting the vally and hills between. We tried to imagine what it must have been like to be the Tompiro people, meeting the Spaniards for the first time.

And what it must have been like to be a Spanish mission priest, out here on the edge of the empire, sitting outside the church on a February day, watching the eagles hunting from the top of the Mesa.

And so our road trip, undertaken to break the monotony of blustery February, became a field trip, a chance to delve into New Mexico history, and to think about issues of colonization, economics, warefare, and religion.

As N put it: "History. It's everywhere you want to be."

Wow, what an educational and interesting trip. I'm going to google the hidden Jews of Northern New Mexico to learn more.

Beautiful photos! And 60 in February. Ahhh. :) Love seeing the images and reading the stories. There is so much rich history in the southwest and all of it is fascinating.

That's so cool I would love to tool around in the SW.

How beautiful and fascinating! My mom and dad lived in Los Alamos for a time, years ago, and we visited the site at Bandalier Park (sp?). It was amazing to imagine all those people living there, in mountain "apartments" so many years ago. I had never seen anything like it. Now I want to go back and see these things again!