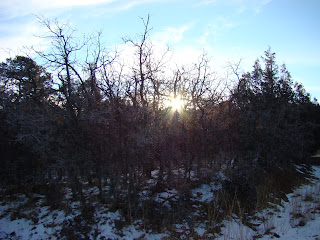 In the cold of a snowy, February Dawn,
as the sun comes up over Los Pecos Ridge and One Pine Hill, come take a walk with me and Zoey and Lily. 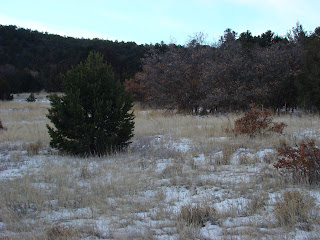 Across the low meadow,

and towards the mountain
we wander, pausing to
sniff the cold air,
and investigate the deer tracks,
frozen in the snow. 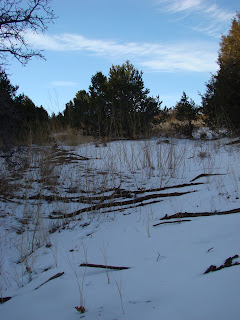 Up from the new road,
along steps of rock and roots,
we climb,
the crunch of the snow beneath our feet
the only sound in the still air.
Ahead, the rising sun is
just beginning to paint the high meadow
in golden light and long shadows. 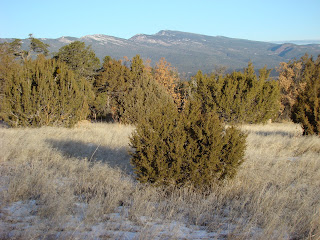 When we climb into the high meadow,

the sun rises, too, ahead of us,
and we blink in the sudden lift of light.
As we turn to the west,
the Sandia fault block draws the eye,
as does the play of wind, light and
deep shadow on the meadow.
Picture by Elisheva Levin February 1, 2008 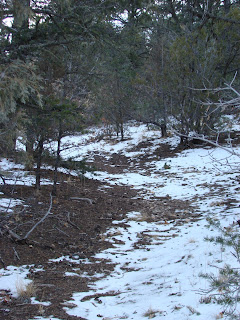 When we descend to go homeward,

the sun is hidden by the ridge once more,

and then we come through the woods

and up the the hill, in the shadows

of pinyon and juniper and scrub, laced with 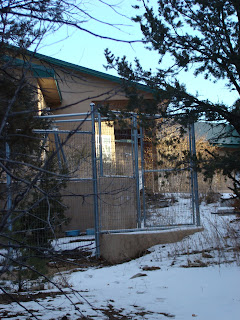 Home is a ahead,

and the turn of the earth is just bringing the sun

to peek above the ridge,

the porch and windows glow,

a beacon to us still under the hill in the pre-dawn.

Hot coffee and breakfast are waiting.

Posted by Elisheva Hannah Levin at 9:39 AM

Oh! You live in some really beautiful terrain. I've been having trouble getting out of the house, let alone getting out on major walks. Inspiring.

As always, your photos are gorgeous. You're quite gifted. :-)

Ahhhh. I just came from KathyJo's blog (it's a quiet evening, and I wanted to go visiting! Hi!) And... this post was like being hit upside the head with a baseball bat. But, well, in a good way. We're from NM, and I saw those cedars and gasped, "Oh, that looks like NM!" Then I saw your sidebar, and whaddya know!

You captured the feel of a wintery New Mexico day just beautifully. Brought a smile to my face, and more than a bit of homesickness to my heart. But mostly smiles. :-) Thank you for sharing your walk in God's country!