Rubies From My Valentine

It's my beloved's birthday, and he has been playing all day up at Angel Fire with the scouts, while CGP and I stayed home to walk the dogs, study and hold down the fort. And so, since the week was busy, and I did not do a Valentine's day post, I would belatedly pay tribute to the romance in our lives tonight.

Of course, Valentine's Day is not a Jewish holiday.
Strictly speaking, it is the feast day of a Christian saint.

But romance is romance, and love is love, and my Engineering Geek, like many geeks,

has a tender and romantic heart.

I will digress here to tell you two stories from our courtship--isn't that such a lovely word?--that will demonstrate my point.


First Story: Early in our courtship, Bruce took a trip to California to visit his brother and sister, and to have the unveiling for his parent's tombstone. While he was gone he called every day. The day after he was due to arrive home that weekend, I had a breakfast appointment with a good friend, and so I thought I would not see him until later. As P. and I were having breakfast, Bruce came into the cafe, carrying a red rose. He walked up to our table and announced: "I am looking for the love of my life." And then he handed me the rose. P. excused herself fairly quickly, and it was Bruce and I that had breakfast together.


Second Story: It was clear by the fall of 2001 that Bruce and I were heading for marriage, and I wondered how he would "pop the question." Rosh Hashannah went by, then Yom Kippur and...gornisht (nothing)! At the end of September, Bruce made a presentation to The Albuquerque Astronomy Society (TAAS) about the total solar eclipse he had observed in Zambia that summer. The day of the presentation, he was uncommonly nervous. He insisted that I sit in the front row "for moral support." I thought he was going on about not much, because he had been president of the society in years past. These were his friends and colleagues in stargazing after all! The presentation was great and was well received. 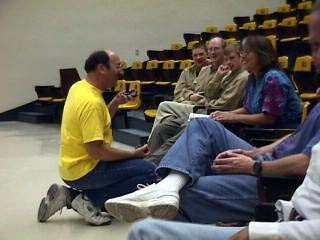 At the end, the president at the time, Eric, got up and said, "Well, if nobody has any further questions, then Bruce has a question about the Diamond Ring Effect." I was unsuspecting, thinking that it was the trivia question, because they had neglected to pass one out at the beginning of the meeting. And then, I realized that people were moving away from me, and taking out cameras. And then Bruce was kneeling in front of me, and presenting me with a beautiful diamond ring.


Oh! That "diamond ring effect!
I was speechless. I guess I said yes, because I am wearing the ring. Later, some of his friends told me that he had planned this ahead and called them. They were all a little worried about what would happen if I said "No." But he was undeterred.

So, as I was saying, my husband does have a strong romantic side to him.
And I get to see it every Valentine's day.
He likes flowery cards with sentimental messages.
The envelope is always labeled: "To My Dear Wife."
And I usually get chocolate and a dozen roses.

This year was different and especially nice.
On Valentine's day in the evening, I had a class to attend.
We did meet for dinner at Gyros Diner, with N., too.
I gave Bruce a card and a gift then.
By the time I came home, quite late, I had forgotten all about Valentines.

But my Beloved remembered. 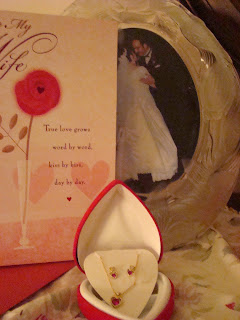 There, on our dresser, was his usual beautiful card.
And a small box wrapped in red paper.

Inside, was a ruby necklace with matching earrings.

And on Shabbat evening, he asked me to be sure to wear them to the table.

Just before the kiddush, as he does every week, he took my hand and said:

" 'Eishet chayil...A woman of valor, who can find? For her worth is far above rubies. The heart of her husband trusts in her, and nothing shall he lack...Place before her the work of hands, for her deeds speak her praise.' " And then he said, "And I give you the rubies, 'for you surpass them all...' "

A woman of valor? That seems a little beyond me. But...

...you will pardon me, I am sure, for thinking I am the luckiest woman of them all.

Posted by Elisheva Hannah Levin at 12:30 AM

Awwww! Now That has to be the sweetest Valentine's story I've ever heard! What a wonderfully romantic man you've got!

I am sitting here with tears in my eyes! The verses from Proverbs really tied it up...what a lovely, heartfelt gift! Long years of happiness to you both!

Wowie! What sweet sweet stories. You do have it good!