Nearly Wordless Wednesday
Take a journey of sunrises and sunsets with me, as we watch the sun apparently move north from the time of the Winter Solstice to the Vernal Equinox.

"The Eternal is the Creator of day and night, rolling light away from darkness, and darkness from light..." (Siddur, Ma'ariv Aravim) 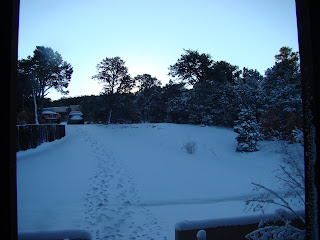 Sunrise on the Winter Solstice 2007.
The sun rose that morning south of east,
along the eastern horizon. 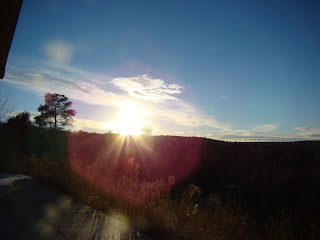 Sunset, the day before the

Winter Solstice 2007, taken from
the Great Room window.
It was snowing on the Solstice. 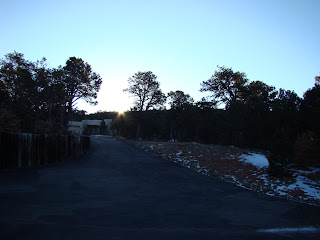 Sunrise, on February 2, 2008, the late-winter or early-spring Cross Quarter day. In the Old Calendar, this is the first day of spring. The sun is rising south of east, but less so than on the Winter Solstice. 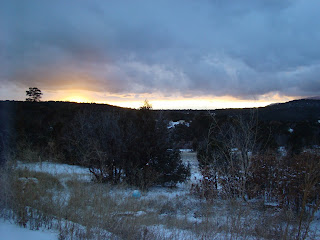 Sunset, a few days prior to the
early-spring Cross-Quarter day,
also taken from the
Great Room Window. 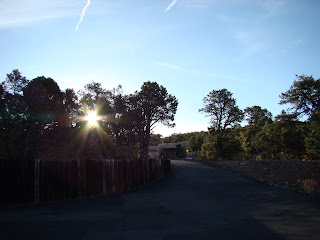 Sunrise on March 20, 2008, the Vernal Equinox.
Here the sun is rising almost due east. As it appears to travel north
along the eastern horizon, the days are getting longer. 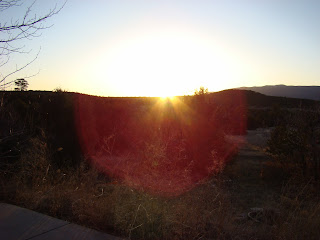 Sunset on March 21, the day following
the Vernal Equinox. This picture was
taken from the patio outside
the French doors, a different
perspective than the others.

"Blessed is the Eternal...whose wisdom opens heaven's gates, and makes the ages pass and the seasons circle through the year..." (Siddur, Ma'ariv Aravim)

Thanks for dropping by my blog and sharing your thoughts. I'm pleased to discover your blog.

Beautiful, Elisheva. I wish I had thought to take photos of our sunrises throughout the year. Maybe I'll start now.

Hi, Suzanne. As the 'govenator' once famously said: "I will be back." And it's not a threat, rather it's to say I enjoy your blog.

Lill, Do start! There will be dramatic differences between the quarters and cross quarters from Maine. It will be really cool to see!