The weeks are flying by, and I realized yesterday that N. will be ending his visit with family in Illinois and leaving for COTE Camp in New Jersey.

Last Thursday, I sent off a box of camping gear by UPS to our favorite cantor in New Jersey.
Tomorrow, she will be picking N. up at Newark, then they will take him to Shabbat Services on the beach courtesy of Temple Miriam. I hope she takes some pictures!
Meanwhile, though, I have been getting an eyeful and an earful about N.'s adventures at "Camp Aunt Madge." My sister, a sucessful graduate of Dad's Kitchen Table University, is not one to let boys merely "hang out." She actually plans activities for them, though she does seem to include plenty of down time for their own adventures.

Now, Dad's Kitchen Table University had a REQUIRED summer travel curriculum. You have not lived until you have fought over a window seat while driving ten hours daily for a week through hot and humid southern Illinois in a car sans air conditioning in order to see the exact spot where George Rogers Clark and his men crossed the Wabash river on a forced march from Kaskaskia to come to the aid of Fort Defiance during the French and Indian War. (Dad found this place by reading the very detailed footnotes in Wilderness Empire by Allen W. Eckhart. It's an excellent book, and Eckhart is responsible for my extensive knowledge of the settling of Kentucky, and the former "northwest territories" which in the 1700's meant Ohio, Illinois, and Indiana). "There were no freeways then!" Dad would enthuse, while driving at 15 miles an hour down a winding country road behind a farmer hauling a fully loaded hayrack. "Great," we would think while sneezing and squirming to find comfort on the vinyl seats to which our bare legs seemed permanently attached by sweat. "I like modernity," Madge would sniff, as she poked Bear in the thigh so she could put kleenex between them to soak up the offending sweat.

Aunt Madge has a similar educational philosophy, although she does not feel the need to duplicate the exact conditions of the settlers by sleeping in tents through fierce thunderstorms and boiling coffee in the coffee can on the fire the next morning while waiting for the sleeping bags to dry out. And her car is air conditioned. 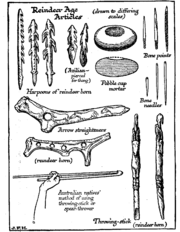 N. and his cousin D. have been to Rockome Gardens, near Arcola, Illinois, to see how the Amish Folk lived and still live. There, they learned also about our more primitive ancestors, by purchasing and using an atlatl. They also have been canoeing on Clinton lake, where N. bedazzled his cousins with his canoeing prowess gained in June at BSA camp. The indefagitable Aunt Madge wrote:
"I could tell that D. was really proud of N. today. I suspect he has done some bragging about his cousin N. to his cousin J. and he was absolutely thrilled to get to show N. off on the lake today. N. says that he had a really good time, but he is not the least bit impressed by his own performance. D. went on and on about N.'s wondrous deeds and N. just shrugged and said, "Well, you would have done the same thing if you weren't stuck in the aft position." (Oh, yeah, right, whatever THAT means!)
The boys had a wonderful time today. I'm just sorry that they forgot my request for photos!"
The photos in this post are from the World Wide Web! Top, maps of Illinois from the Illinois Tourist Bureau. Middle, Reindeer Age technology from Wiki (includes atlatls), and bottom, a 'one horse power saw' from Rockome Gardens. 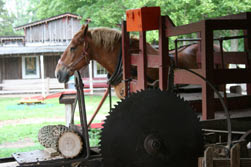 And of course they had the Glorious Fourth mid-western style with a cookout, followed by the town fireworks display complete with simulcast patriotic music played on hundreds of portable radios, proudly sponsored by State Farm World Headquarters.

N. has learned something about quality music, too, versus trash, all because a CD with a parental warning some irresponsible adult sold him at the Denver airport went straight into it (the trash, I mean), after Aunt Madge listened to the one half of one track. But that's another story...
I really want to bring N.'s cousin D. out here for some summertime fun, but you know, the forest was closed because of the fire danger, and, you know, Grandma and Papa don't live just down the street. (Papa is the founder and professor emeritus of Dad's Kitchen Table University).
So...maybe this fall sometime. The Chem Geek Princess will be moved out and I will have a guest suite available.

Posted by Elisheva Hannah Levin at 10:07 AM

Congratulations to N. on his expert canoeing. That is awesome.

I have many memories of LONG hot car trips on vinyl seats. :-)

I remember the vinyl car seat covers that were shaped like package wrap is now. We used to come out of the car with little circles on our hot, sweaty legs. Without seatbelts, we found all sorts of ways to wrap our legs about to get comfortable with 4 kids.
Clinton has another pair of eagle babes this year. We haven't seen the parents, but the nest was very impressive. (They quartered up at the Exelon employee beach, which knocked out some of our summer plans the last 2 years...for a good cause.)
We just had Beachy egg noodles from Arthur and I thought about your family. :-) Roaming around Arthur to the little Amish stores is great fun (and good eating) too.
What great adventures N had in IL! There's many who live here who haven't had the experiences N had at Dad's Kitchen Table University.

I do remember those little "dots" and the fact that our parents did not make us wear seatbelts. In fact, I do not believe there were any in the back seat! What were they thinking!

And yes, Dad's Kitchen Table University is certainly a unique education. I visited most of the Civil War battlefields east of the Mississippi, sporting those little dots on my legs! And what I learned made school seem positively a waste of my time!