Found: A Forthright Candidate (Too Bad He's Not Running)

Last night, Bruce and I did something I don't think we have ever done before: We went to a political comedy live broadcast at a movie theater. It cost more than a regular movie, too. But with N. in Illinois (that was last night, he's now in New Jersey--Boychick, the world traveler) we thought we'd splurge--so we mortgaged the house to buy some extra gas (just kidding!) and went to see Glenn Beck's one-man show Unelectable! We even had dinner afterwards at a nice place.

We really enjoyed it. The first half was comedy, the second half was 'the speech from a candidate that you've always wanted and never heard.' Although this guy bills himself as a conservative, he has some libertarian ideas, as you'll see from his platform.

We really weren't sure how full the theater would be, but Albuquerque is a military town, and also has the National Labs, so it was a large theater and it was pretty full, even though people had to drive to the west side (side is pronounced 'sah--eed' when combined with west here) during rush hour, which takes great bravery for the average Albuquerquean.

And when the show was going on it was very much like we were in the actual live show in Dallas. People clapped, people cheered, people enjoyed the people by them. You could feel the audience energy.

During the first half, the humor, which had a political edge was non-stop, and I doubt there was a dry seat in the house. The second half was part political speech as we'd like to hear it, and full of humor to boot, but it ended as an inspirational sermon in the American style. By the time Glenn ended by quoting the final phrases of the Declaration of Independence:

"... And for the support of this declaration, with a firm reliance on the protection of Divine Providence, we mutually pledge to each other our lives, our fortunes and our sacred honor"

there was not a dry eye in the house. It was that good.

Who wouldn't want a candidate to start a speech by removing the power coat, loosening the tie, rolling up his sleeves and then saying: 'I'm not doing this to impress you, I 'm doing it because I'm hot. These lights? They're murder!'

After stating 'for the press' that 'every bad thing I've done that you dig up, that's me! I did it,' Glenn went on to give his platform. It has five simple planks: 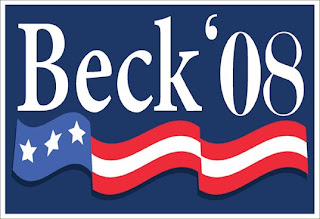 1. If the US goes to war, it should go to win. Otherwise it is immoral to send soldiers to fight overseas.

2. Stop spending us to oblivion. All Glenn plans for the Feds to spend money on are big missiles and smooth highways. If you need help, go to your family, your church or the local community. And he won't bale out the banks. Otherwise, the Feds should "get the hell out of our way."

3. Fix illegal immigration. Build the fence, but put Lady Liberty's golden door in, and make it wide enough to bring in those who have something to contribute and who want to be Americans. Illegal immigration is modern-day slavery and it's immoral.

4. Leave our kids a country that is better than we inherited (and what we inherited was sweet). All kinds of things were invented here, and that good old Yankee ingenuity can solve problems. The Feds can't. Washington does not have the answers to our problems. We do. We need to get back to drilling our own oil, refining it, as well as developing alternatives that we haven't yet even dreamed of. Remember, most of what was invented here was done on private money, not the public nickel. We need to start taking risks and building things again!

5. Remember who we are. We are Americans. We have freedom's inheritance. America does not reside in Washington. The answers we need (which don't come from Washington-see above) reside within us. We need to take our country back, beginning by teaching our children--which is our responsibility--who they are and the ideals this country was founded on.

Found: A candidate who will tell it like it is. Too bad he's not running for president.

But he is very funny. And very moving.

You sound like you've had an amazing summer! Congrats on the road!