This weekend is an important one for patriots.
Here in New Mexico, Ragamuffin house will be joining in two days during which we will stand up.

Tomorrow is Patriots Day, the day upon which Patriots will gather to REMEMBER the terribly attack on the World Trade Center in 2001. 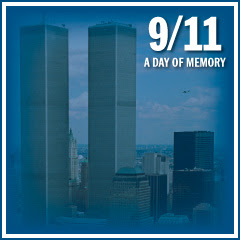 For Ragamuffin House, this is a day of REMEMBERANCE. And we will be lighting our Shabbat Candles at Haynes Park in Rio Rancho, where the Albuquerque Tea Party will be putting on a Candlelight Vigil as a memorial to those who fell and those who helped. The Vigil is at 7:30 on 9/11. 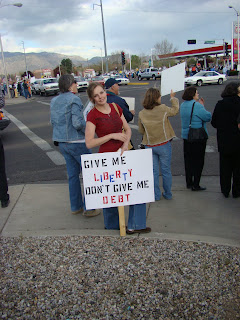 On Saturday, 9/12, we will be joining with Tea Party groups and 9/12ers across the state in Santa Fe, as we March on the Capitol.

This will be the fourth such Tea Party Rally that we have attended. In the picture to the right you see the Chem Geek Princess at the first Tea Party.

For this Rally, I am planning a new sign. It will have a picture of Barack Obama and say "L'Etat es Vous? NO! Where is the Fourth Estate?" On the back it will say, Where are Woodward and Bernstein when we need them?

It is time we called the press on their inaction. Why 30 years ago they would have been all over some of the scandles we have been treated to in Washington in the past few years.

Americans, it is time to stand up!

Don't underestimate us, O ye who claim to represent us!


May the memories of the fallen on 9/11 spur us to action.
May G-d save the Republic of the United States.