A Patriot's Dream That Sees Beyond the Years 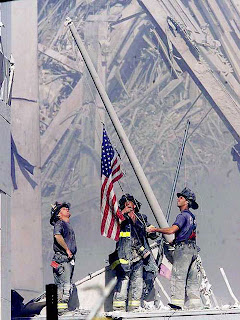 Eight years ago, we awoke to a vision of a great city that we never wanted to see.
Smoke rising from twin towers.
People falling from the sky.
The noise of life becoming the stillness of death and destruction.
Last year, on this anniversary I wrote:
"I remember looking into the young eyes of . . . those who will not directly remember 9-11, hoping that out of this terrible attack we could bring to them a world of greater prudence and liberty."

I said that no sleeping giant had been awakened, that the Freedom Towers had not been built, and I feared for my country.

And this year I could stop there, having written the same, or even worse, for I fear that the strength of the United States, derived from individual rights and Liberty, is being even more rapidly being taken from before our very eyes than before.

And I still fear for the Republic.

And yet, I have seen evidence that the spirit of our founders, is being awakened anew as the peril to our liberties has accelerated.

Nine. Eleven. It always brings to my mind America the Beautiful. We sang the song together in the gym of the school where I taught that day. And this year, I hold stubbornly to this verse: 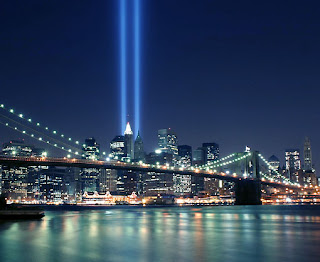 "O Beautiful, for patriot's dream that sees beyond the years,

But those cities will be built by the hands of those who know the rest of the verse:

"America, America, G-d mend thine every flaw, Confirm thy soul in self-control, thy liberty in law."

It was human liberty that built that great city. The self-control necessary for individuals to forgo immediate gratification in order to save, to plan, to dream the future. Those lights show us where the alabaster buildings will grow, that are now a spark in the minds of the builders. That liberty is expressed in law that protects the rights of the individual, making room for the creative expression of those ideas--those light-bulbs of the mind--that require years to bring to fruition. 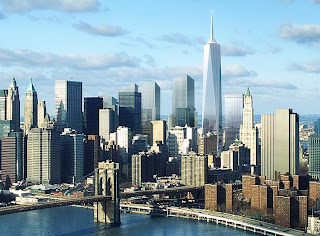 This is an image of the great city rebuilt.
The tower built by the work of free human beings, undimmed by the salt-water tears of slavery.
Posted by Elisheva Hannah Levin at 12:43 PM