Deja Vu All Over Again! The Friday the 13th Snowstorm 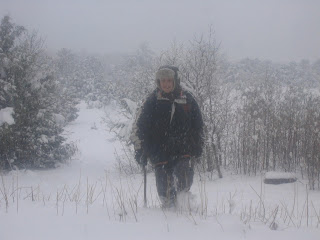 On Friday afternoon, we came home to see N. walking up the hill to the house in the snow.
Yes, really! It is pretty unusual for central New Mexico to get snow this late in April, even in the mountains. He told us that he had build a wickiup in the forest and had studied the insulating properties of snow. Next winter, we'll have to teach him the use of a psychrometer. This time he just used a thermometer. 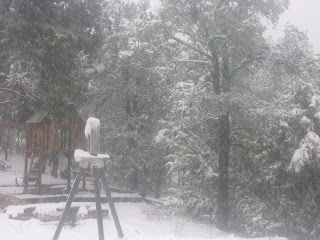 Bruce and I were at the synagogue Thursday night, and I stayed in town on Friday morning because I had a review session for our last exam in Neurobiology (coming on Monday afternoon) and then class after that. I kept in touch with N. and MLC., who were at home. Apparently, it snowed all day. When I talked to MLC at 4 PM, she was concerned that I would not be able to get Henry, the big red truck, up the hills to our development. Poor Henry! He doesn't have 4WD so slippery hills are tricky! 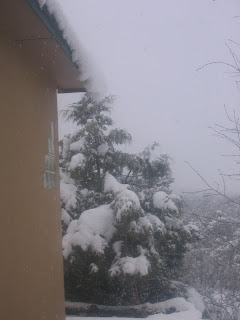 e grocery store--we needed a few things--and drive home together in his Focus, which has front wheel drive. So we secured Henry and started off. (I was remember February 13th when I did not heed N.'s warnings about the snow and ended up sliding Henry down the hill backwards to Alta Vista). It was raining miserably in ABQ. Just east of Carnuel, it was snowing. By Tijeras Village it was sticking. Snow was Packed on the sides of the road at Zuzax, where we exit the freeway. Old Route 66 was snow packed when we were half-way up Sedillo Hill. But the snow was so wet, that I think I could have got Henry all the way up Via Sedillo and home. But better safe than sorry!

By the time we arrived home, there was 4 inches of very wet snow in the snow guage! Amazing weather. I mean we expect frost until around Mother's Day--but our last snow is usually on April Fool's day, if we get any in late March and April at all! But this year, we had snow last weekend and this weekend!

BUT...we need to be grateful. Every bit of precipitation is a blessing after the last ten years of drought! 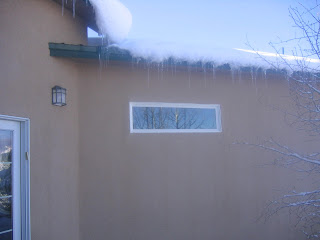 This morning, the snow was heavy on the eaves of the house and there were icicles hanging down, as well. I put the towel for boots and another for the dogs by the front door. The pellet stove was fired up. If not for the spring solar angle, it would have seemed like January all over again!

But this was definitely a spring snowstorm. The snow was very heavy and wet, and the trees 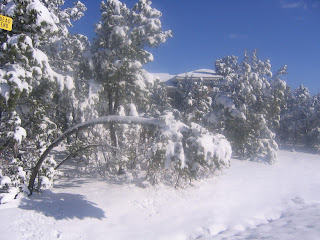 were weighed down to an extraordinary degree. The light was spring light, and by afternoon, it was 58 degrees outside and felt like spring. Water was cascading off the roof and the icicles were gone.

Our morning walk was definitely a wintry feeling walk, and we got a good picture of a snow-bent tree over on Shultz Road.

But this afternoon, when MLC and I had our toes done in Albuquerque, we wore short sleeves and sandles. Go figure.