After the Snow, A Winter Wonderland 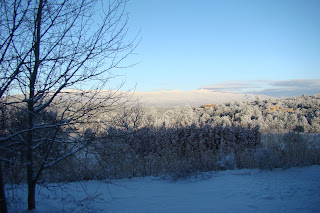 This morning the dawn broke over a sparkling winter wonderland created by the combination of snow and freezing fog from the Thanksgiving snowstorm.

At dawn the temperature was 15.6 degrees F. 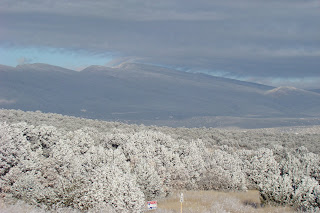 The storm was lifting up it's skirts and heading to the northeast, leaving the Sandias coated with a delicate white frosting.

We knew it would soon be gone, so we got bundled up to take the dogs for a Shabbat walk. 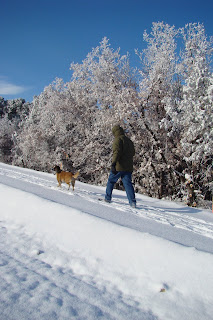 We had planned only a short walk because it was cold, but even thought the temperature was in the teens there was no wind and the sun was intense and warm on our faces as we headed up the new road into the high meadow.

As the clouds retreated, the sky took on that intense blue of winter in snow at high altitudes.

Despite the cold, the dogs were frisky and happy to be outside after the storm. 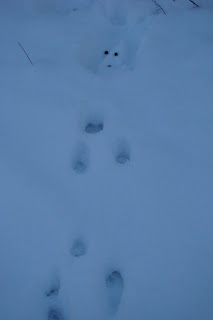 The animals had already been out and about their business like shoppers venturing out to fill the larder after a big snow.

Here, in the woods, we found rabbit tracks venturing out of the brush and into a small glade.

We also saw coyote tracks, deer tracks, and the tracks of field mice. At one place in the meadow we saw the tracks of a coyote overcome those of a field mouse. The field mouse had become the coyote's breakfast tidbit. 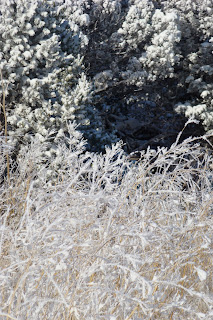 The grasses and trees were coated with horfrost from the freezing fog, with snow frosting lightly over the frost.
As the sun rose up over the mountain, the whole meadow and woods became blue, white, and gold with diamond points of light so intense that we could not look directly at them. 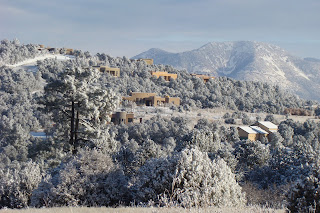 The houses of Rancho Verde Road look like pueblos agains the shadows and snow of South Mountain.

Winter is still new and wonderous now and this snow will not last. As I write, it is dripping and sliding off the metal roof, melting away in the solar heat of midday.


But the ground will be colder and frozen and the next time it snows, all of it will remain as more falls.

We are thankful this Thanksgiving weekend for the snow which brought much needed moisture to our mountains. And we are ever mindful of the beauty of our mountains that unfolds differently with the coming of each new evening and every new morning.

My son is now longing to return to New Mexico, this time in the winter! Gorgeous!

Wow! Your snow is beautiful! Given the temperature, I'd have stayed hunkered inside with the cider though. New Mexico looks so different from the way I always imagined it.

I liked your Albuquerque Turkey song a few posts back! I thought of you when my mom and I were asking around the grocery stores in search of a kosher turkey for my brother and his girlfriend -- we had to explain what kosher was to all the meat dept. guys so, as you could guess, we failed in our quest and the kosher guests ate salmon.(The reason I thought of you in particular is that you post pictures of traditional Jewish food.)