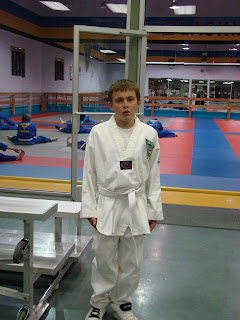 On Saturday, when our 30-day trial was up, we made the decision to enroll N. in the Black Belt Club at his Taekwondo school, Blackman TKD. It was a no brainer really. There are numerous benefits to the club. First, we get nearly a 50% discount on what we would pay otherwise for a two-year membership. Secondly, N. will get discounts of sparring equipment, seminars, competitions and private lessons. Thirdly, N. is making a long-term commitment to work toward a goal. As we all know by now, self-concept and confidence is gotten from the disciplined work that leads to achievement. Despite the persistent messages we all heard from the recovery movement in the '80's and '90's, there is no shortcut to good self-concept to be gained by being praised just for breathing.

But there is another benefit to this kind of physical training that is not often discussed in this day and age of No Child Left on the Playground. Physical activity and training is extremely important for the health and development of the brain. In all of our discussions of school reform and school achievement from Sputnik to A Nation at Risk, this is one area that has been consistently forgotten. The politics and theories of education, especially K-12 education, often conceive of children as nothing more than disembodied brains into which we can pour a fund of knowledge made from a predetermined, standardized mix. This is kind of like the space-age futuristics of the 1960's, when we thought that we would get all our nutrients from pills and our Vitamin C from Tang. But here it is, already the 21st century, and we find that there are numerous health benefits to be gotten from actually eating!

Now we find ourselves in the age of No Child Left Untested and we still have the idea that we can somehow force children to learn the same stuff at the same rate if we just take away playground equipment and spend recess time remediating them with endless worksheets--a kind of drill-and-kill method of standardizing the minds of children. I suppose that this is to expected of a society that denies that there is such a thing as human nature as well as denying our evolutionary origins within nature.

But try as we might, we still have to deal with the pesky fact that the systems of our intellect require the use of the whole body to develop well. Motor skills are intimately involved with such amazing intellectual feats as "reading and 'riting and 'rithmatic." And motor coordination is developed by the use of the body. Essentially, it takes brains to develop coordinated movement and it takes coordinated movement to wire brains. After all, a disembodied brain would have no reason to function, since the whole point of the brain is to take in and process information of all kinds in order to make decisions about activities that will enhance the survival of the organism in which it resides!

In the past decade, even as we have busily put kids behind the flickering screen for hours, removing them from the physical world, the field of neuroscience has been busy discovering the biological basis for the importance of physical activity for intellectual development and, even more basically, mental health.

In 1997, a paper published in Nature described an experiment that demonstrated that neurogenesis (the formation of new, functional neurons) occurs in the adult human brain. This means that the brain continues to develop throughout the lifespan. The concept of neuroplasticity--which means that the brain changes based on how it is used--could now be demonstrated from the very basic level of the cell. Since that time, new information has been accumulated by neuroscientists that demonstrates that genetic and environmental factors both influence neurogenesis. What has been most thouroughly investigaged is the neural cell bodies in the hippocampus, an important part of the mammalian brain, which is the place where learning takes place and memories are formed. The kind of long-term electrical potentials that are required for learning are dependent upon a neurotransmitter called serotonin (5-HT). What is interesting is that we are learning that the neurogenesis of serotonergic neurons in the hippocampus can be upregulated by such environmental factors as physical activity, as well as an enriched environment, estrogen, and growth factors. There are other environmental factors that will do this as well, such as traumatic brain injury or ischemic events (oxygen deprivation from stroke or heart attack) and electroconvulsive shock therapy--but I don't think we want to go there! 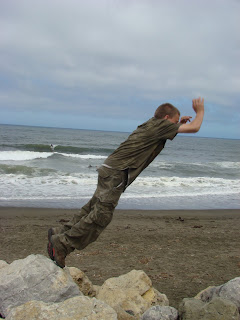 Now consider the mental health problems that we know are correlated with low amounts of serotonin in the neural synapse: depression, anxiety, attention deficits, perseverations and so forth. Please note that I am not saying that it is the lack of serotonin in the synapses that cause all of these--in fact, what happens is an imbalance in a number of transmitters due to developmental differences in the brain's structure that make a person susceptible to these neurological problems--but we know from research and drug therapies that increased serotonin in the synapses greatly alleviate these problems and that environmental factors such as ongoing stress increases them. Furthermore, we know that many neurological syndromes such as ADHD, OCD, and Autism Spectrum Disorders (ASD), share symptoms such as anxiety and depression and perseverations.

Essentially, physical activity is important for mental health for all of us. Yesterday, when I was reading abstracts from journals in order to formulate a review paper I am writing for Neurophysiology class about adult hippocampal neurogenesis of serotonergic neurons and depression, I counted at least ten papers published in the past year or two that discussed (at least in part) the benefits of physical activity on neurogenesis and the upregulation of serotonin. And it is really important for our children who have such neurological problems as ADHD or depression or ASD. Although physical activity is not a cure for these developmental problems, it is part of the treatment. 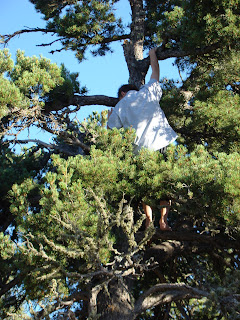 Our children need and deserve plenty of time playing outside in the physical environment. Among mammals, play is important work that develops strength, reflexes and ultimately, develops the brain and the intellect. This is not just leisure activity to be used to fill in the time when they are not learning. As John Holt used to say, we are "learning all the time."


So when your kids are playing outside, running, jumping, and climbing trees, they are learning. Or when they are playing catch in yard, swimming, or practicing their Taekwondo, they are learning. And when someone asks why they are not inside doing more worksheets, smile sweetly and tell the person that your kids are getting physical activity in an enriched environment and are thus growing serotonergic neurons in the hippocampus.

I promise that if you say this, when they are done checking their dictionaries, they'll never mess with you again!

Posted by Elisheva Hannah Levin at 8:55 AM

There's definitely a mind/body/spirit thing. I didn't do much in the way of formal sports when I was little [although we had pe for an hour a day] but we spent so much of our time just 'playing around' outside. Pity that's not a safe option any more.
Cheers

I have felt intuitively for a long time that there is a clear biochemical/neurological link between ASDs/ADHD and affective disorders (depression, anxiety, etc.) As you know, my daughter is dually diagnosed with Asperger's/NLD and a severe anxiety disorder. You are the first person I've talked to who's actually referred to research supporting this point. Also, I did not know about the clear link between serotonin and learning (though, of course, it throroughly makes sense).

Could you direct me toward some articles I could read about research in these areas? True, I am not a scientist. But don't worry if they're "too technical" *LOL* I'll muddle through and get what I need. *LOL* ;-)

This is a fabulous post, and reflects many points I've been preaching about for years. Of course, I don't practice what I preach. (All talk. No action) Neither my kids nor I are nearly physically active enough. *Sigh* At least they're not trapped in a recess schedule.

I had to stop by after reading there was a post at the hscarnival by a gal named Elisheva ... I recognize the Hebrew.

So, does this mean there's not really any such thing as a "dumb jock?" :)

I love that last line...couldn't resist trying it out on my dh when he came in this morning and asked what the kids were doing outside during the time we usually do academics. I'll keep that one on the tip of my tongue for future use!