The Last of Down Time Extended

The end of the secular holiday down-time was upon us at the beginning of this week.
We had several projects planned to get ready for the continuation of our almost-annual New Year's Day Open House. 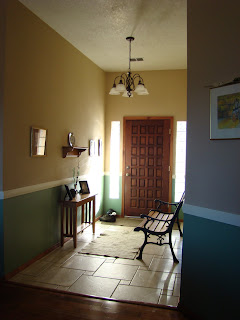 On Sunday and Monday, I had a lost of housekeeping "stuff" that needed to get done in preparation for our guests.

High on that list was the completion of the work in foyer. We moved the boxes of flooring (still to be laid in our offices and N.'s room) and the tubs of glue into Bruce's office. On Monday morning, I painted the last wall. Bruce sanded the park bench and stained it with Teak Oil. By that time, the wall was dry and the bench was placed against it. The rugs were laid out to enhance the new conformation of the foyer. Now we have a place to sit to put on and take off our boots. A mat in front of the door for muddy paws and shoes, and a rug in front of the bench are both very important (at least to me!) for keeping footprints off of the new Brazilian Cherry Hardwood floor in the living room and hall.

Another item that has been on my list for a long time is the completion of artwork on the living room wall behind one of the sofas. It all started when I ordered a framed print of Chagall's Three Candles for our anniversary last June. (It is the piece on the right). I had imagined placing it above the fireplace, and planned to move the Efgi Salute to Israel currently there to the middle of the couch wall. When we got the Chagall, Bruce did not concur. He liked the Efgi above the mantle, and insisted on putting the Chagall where you see it. At that time there was nothing on that wall other than the Chagall to the right. The wall was empty, except for that rather unbalanced piece. I thought it looked odd, but since we were putting in the wooden floors, I let it go. 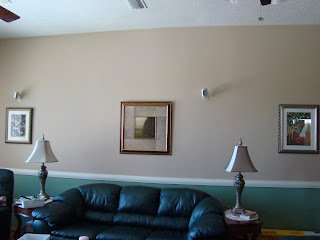 I did, however, have a plan: two more Chagall prints for that wall. Before I could hatch my plot, MLC gave me a Tuscan style landscape for Hannukah. That was hung in the middle, right above the couch. For now. I then ordered a matching framed print of Chagall's The Wandering Jew for above the recliner. That makes that wall look balanced. It is done--for the time being. Eventually, I plan to order a large landscape oriented Chagall for the middle and I will move the Tuscan landscape to the dining room. In the meantime, this looks pretty good to me.

The morning of New Year's Day found us getting ready for our party. We just don't do midnight. Instead, we watch the ball fall at 10 PM and go to bed. Bruce did wake up at 12:06, push the button on his talking alarm clock--don't ask!--and when it told him it was 12:06 AM, he wished me a happy New Year with a kiss, and we both went back to sleep! We are becoming "fogies." 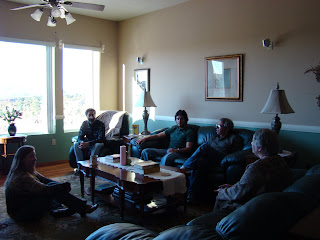 By 1 PM, the slow-roasted Turkey was done, the breads and condiments for sandwiches were laid out, the wine and sparkling juice was open, and the coffee was set up. As people arrived, bringing side dishes the fun began. We had about 20 guests in all, which is a good number for me. At our last New Year's Open House, we had over 30, and I never got to socialize with them, since everyone seemed to need something one after another. This time, since I had invited fewer guests, who were also more independent, I was able to actually talk to everyone a bit. People spread through out the house, made themselves comfortable and had a good time. 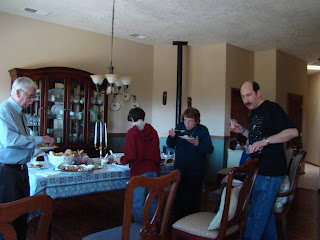 The food was plentiful, as people brought side dishes, such as fruit salad and corn bread with honey butter, and great desserts.

I also got Bruce to take charge of making sure that the turkey was carved and replenished on the platter as necessary. This meant that I could take care of other needs and still have time to enjoy our guests. A good time was had by all!

Yesterday, we were planning to get back into the routine. Bruce went back to work and I had thought that N. and I would discuss his studies and make some plans. But the best laid plans, as they say, 'gang maest aft aglay!" Another death in our congregation meant that we attended a funeral yesterday, as well as the Shiva in the evening. Today we are all home again. It seems that when Bruce and I attended an engagement party at a friend's house in Albuquerque last Thursday, we picked up a virus. The congestion started on Tuesday, and today we both woke up with full blown colds. We are hacking, sneezing, and blowing our noses, and feel enough under the weather that Bruce took a sick day and I am resting--mostly.

This means that we are taking an extension of the "secular holiday down-time" in order to nurse our colds. Luckily, I have a lot of chicken soup left over from N.'s birthday.

"Zie gezundt!" we say, over our soupbowl rims. "Be well! And down the hatch!" At least it tastes better than cold medicine. And it warms up the belly nicely. And you know what they say: just take copious amounts of Jewish penicillin and in a week or ten days the cold will be gone.

Posted by Elisheva Hannah Levin at 11:33 AM

Your artwork looks beautiful. We need more art for our walls. I don't have a knack for decorating.

In answer to your question from a while ago, yes we did get a LOT of snow up here! Feels like a pretty normal Michigan winter, unlike last year.

NO fun with the cold - seems like everyone in the country has something now. Guess it is inevitable this time of year! Feel well!

Your house looks so pretty! I love that huge window in the living room.
Sorry about the virus! I guess that is the drawback of socializing. I hope you recover quickly!