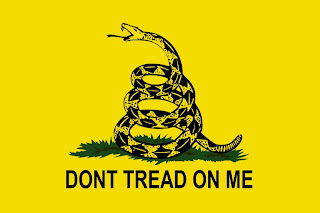 As I said yesterday, on Tuesday I was at the Albuquerque stop for the Tea Party Express.
The event was actually held at Rio Rancho's Haynes Park, just to the northwest of ABQ.

As has been their habit, both the Albuquerque Journal and KRQE News 13 got it wrong.
KRQE News 13 showed up at about 11 AM, two hours before the event, and reported that the Rio Rancho DPS stated that 300 people were there. The Journal must have got their news from the TV station. Such great reporting!

When the Tea Party Express Caravan arrived shortly after 1 PM, I estimated many more people than that. Using grid method of estimation common to field biologists (I am a trained field biologist), I estimated at least 900 people. Pretty good for a Tuesday, work-day afternoon.

But we do not have to rely on my crude count. Organizers of the Tea Party were placing sticky dots on people's shirts, so that they would have a pretty good estimate of the crowd.
They began this practice after the local media woefully underestimated the number that attended the Tax Day Tea Party on April 15, for which the Albuquerque Journal originally said there were a few hundred--such great precision, that!--at least a half-hour prior to the beginning of the event. Do I detect a pattern of misrepresentation here?
In any case, the Albuquerque Tea Party organizers, prepared for about 1200 people, had purchased 1350 sticky dots. They ran out of dots prior to the end of the event, and people continued to arrive. So total attendance was more 1350 people.

The misrepresentation of the numbers was unprofessional, but what KRQE News did on their blog was positively juvenile. Here is the original headline (which was changed today--though so far they have not changed the numbers) screen-captured by my friend and fellow NMPA member, who was also an organizer for this event:

This headline gives implicit insult to the people who were there, using a now well-known sexual innuendo to describe what is actually called The Tea Party Express. After a great deal of protest in the comments to their blog, found here, during the first 24 hours, KRQE changed the headline. However, the link continues to bear the derogatory term seen above.

"Tea baggers is an obscene and derogatory expression used by a biased media with a liberal agenda. You may yank this, because you ARE biased, but I must try. Your reporter showed up very early, before the Tea Party Express even showed up! We put stickers on everyone and counted the stickers beforehand, so we know we had well over 1,000 because they ran out of the stickers! People also signed their names. Too bad KRQE is missing out. That's the way to lose viewers."

And Pat, who was in charge of estimating the numbers wrote this yesterday:

"KRQUE [sic] showed up at around 11:00 when the event was just being set up. So if as you say we had 200 people there at 11:00 by1:00 we had count of over 1350 . We had purchased 1350 stickers to help with our head count and all were passed out. That is how we can say we had over 1350 people. If your news crew had come to report the news they would have showed up around the time the event started instead of before the event started. I am glad you removed the derogatory term, but it should never have been used in the first place."

Others who were there wrote to express their disgust about the derogatory language and about their frustration with the so-called professional media. My friend, Corky wrote:

"Lovely, just lovely. I am truly impressed with your reporting. Who's your editor? Bozo the clown? I loved the earlier wisecrack about the editor making poot sounds with his hands. LOL! I was there. There were well more than 1000 and you can bank on it. Well behaved, caring Americans, not Tea Baggers, thank you very much. I have a screen shot of the original headline which I'm sending to many patriots across the country, along with the station's contact info. You'll be famous."

Hey, Corky, I am doing my part to pass this on! Another attendee has captured a PDF of the original story and has passed it on to Glenn Beck. I wrote the following comment:

KRQE: Ours is another household that will boycott both your television station and your sponsors. The original article has been saved as a screenshot and a pdf, and patriots like Corky and Joe have seen to it that patriots all over the United States will see it. The derogatory title was inexcusable and the juvenile reporting is unprofessional. This may have passed in Pleasantville, but it certainly will not in the age of the internet. If this article is an example of professional media, no wonder newspapers and TV stations are failing by the thousands. Patriots Unite! If our opponent is this stupid, we should win handily.

Of course, those who wish to destroy the Republic and replace it with some version of collectivist statism are not that stupid.
But the media is. They have to use a neologism, "misunderestimated" us.
This story will be told no matter how hard they try to insult it and suppress it.
Nevertheless, we must out the media bias and bad reporting wherever we see it.

And one final word to the media: Don't forget, we older folks are the ones that buy the things your advertisers are selling. And we're the generation from the draft-card burners of the 1960's.

Don't mess with the Gray Champions!

Email ThisBlogThis!Share to TwitterShare to FacebookShare to Pinterest
Labels: Don't Tread on Me, KRQE 13, Media, R3volution, The Albuquerque Journal

KRQE has removed all the comments to their Tea Bag/Party article. They've essentially erased evidence of their bias and citizens reactions.

Anonymous: too bad for KRQE, many of the comments have been reproduced elsewhere, or read by Patriots all over the country. This action ultimately looks bad for KRQE, and we know that they know we are watching them.

Elisheva, Can you provide any cache copies or screen shots of the KRQE site? I can't find anything. Thanks!

Anonymous: I received an e-mail with the copy of the screen shot. But better, I can get a hold of the guy with the original.