Pesach Reflections: A Web of Women

Today began the week of serious preparation for Pesach (Passover). For several weeks, we have been doing serious spring cleaning, nested with the rest of our daily and weekly routines. This week, much of the rest of our daily routines will be dismantled, as I organize the buying of Pesach foods, the turning over of the kitchen for Pesach, and the preparation of the Seder shel Pesach--the ritual meal--at which we remember our redemption from Egypt.

As we physically prepare our home and our table for this great commemoration, we also prepare ourselves spiritually to come forth from slavery into our yearly encounter of what it means to be truly free. As it is written in the Hagaddah--Lit. The Telling--which is the book read and told at the Seder: "In every generation, you shall regard yourselves as having personally come forth from Mitzrayim (Lit. the Narrow Places--Egypt).

This week, as I spend my days removing Chametz and preparing for the Festival, I thought I'd use this blog to reflect on aspects of the story that are meaningful to me.

A Web of Women

"The liberation of the people Israel from slavery in Egypt begins with the saving acts of women." (WTC).

The stories of our sages and our old wives tell us this: that without these saving acts of women, we would have never been part of the great story of coming forth from slavery to freedom.

The story begins with the hateful command of Pharoah:

"A new king arose over Egypt who did not know Joseph. And he said to his people, "Look, the Israelite people are much too numerous for us. Let us deal shrewdly with them, so that they may not increase; otherwise in the event of war they may join our enemies in fighting against us and rise from the ground." (Shemot 1:8-11

And so, we are told, Egypt enslaved our people Israel, and made for us bitterness and bondage. But still, the story tells us, we continued to incease and become numerous. And so came the edict of the killing of the baby boys.

In the Midrash, we hear that upon this terribly decree, the men of Israel decided to refuse to sleep with their wives, so that no children would be born only to die. But the women of Israel refused to accept this. Although enslaved, they made themselves irresistible to their husbands, so that the people of Israel would survive until G-d remembered the divine promises. 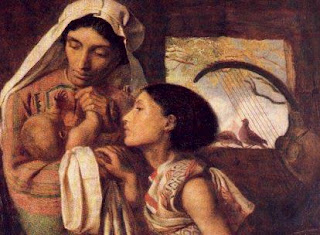 It is also said that when Amram refused his wife Yocheved, his daughter, Miriam the Prophet, told him that this was wrong, and she told him that his son would one day redeem Israel.

Thus, it was by the actions of women that Moshe was conceived and brought to life.

The Midrash also tells that Yocheved was herself a midwife, as was her daughter Miriam, and that they were the two Hebrew midwives that disobeyed Pharoah, and said: "The Hebrew women are vigorous (chayot--the root can mean wild, but it also can mean life); before the midwife can come to them, they have delivered."

These are women of no small courage, for they knew that they must lie to Pharoah in order to preserve the lives of the Hebrew sons. 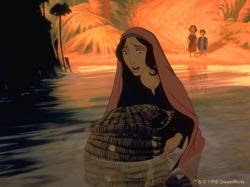 And when she could no longer hide her son, Yocheved places him in a woven ark (teva) caulked with bitumin and pitch and sends him down the Nile, as his sister Miriam watches to make sure of where he comes to safety.

The story of the woven ark is written in such a way as to remind us of the other ark, the one that Noach made to save life on earth. So, too, does this ark save the people Israel. 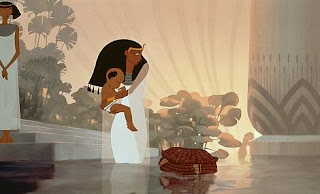 And at the end of journey, an unexpected event. The daughter of Pharoah finds Moshe, adopts him as her own, and calls his own mother, Yocheved, to nurse him for her. This is important, because the sweet taste of his mother's milk will bind him to his people and their G-d, according to the commentators.

Further, the text explicitly states that Pharoah's daughter knew that Moshe was a "Hebrew child." Thus, she also defies Pharoah's decree of death, risking her own life to save this Hebrew child. 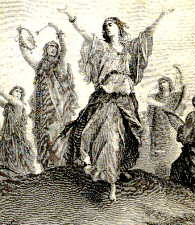 So it is that Moshe, the destined hero of the Exodus, is saved by the weavings of a web of women. Women who, in a dark time, look to the light; women who sustain life at the risk of their own lives, and whose defiance demeans the great king of Egypt, who is supposed to be a god.

Israel was ultimately redeemed through women's work.
Work that deals with the blood and salty water of birth, human milk, and the physical and real stuff of life.

I think about this a great deal as I scrub away the stuff of life, the grime of everyday sustenance in the kitchen, removing the leavening and making way for a new beginning of freedom.

Freedom does not come easily. It takes hard work and courage, and the strength to resist the decrees of tyranny--large and small. Like Yocheved, Miriam, the Hebrew women and midwives, and Pharoah's daughter and the women of the palace, we must recognize the power we must defy, and be more in awe of the source of freedom than of the power of tyrants. As women, immersed in the physical stuff of life--blood and birth, tears and mother's milk--we respond from a place of our power, rooted in moral and ethical reasoning, as well as an emotional response to the suffering of ordinary people who are deprived of their lives by the arrogance of tyrants.

(I wish I knew who wrote this. I remember only the chorus from years past. If you know, comment, so I may give credit).

This is beautiful, and very empowering. Thank you again for sharing!

I think A Web of Women was written by Rayzel Raphael but I'll look it up when I get to work!

Beautifully written. Thanks for sharing this - very moving.

so Yocheved & Miriam are Shiphrah and Puah?

Looking forward to remembering that I've been set free from Mitzrayim.

This was beautifully written. I had a start when I realized-- as well as I know this story-- that the Pharoah's daughter probably knew his actual identity, not just that he was a Hebrew. It draws her in a very different light for me.

I love the web of women-- for as distracted as we all become by the media and by things that just do not matter, it does always seem to remain at the core of things.

Every time I hear the story of Moses (I like Moshe better), I can't help but admire the midwifes. Such a small amount of information, but it says so much about them.

I thought many of you might enjoy this different take on an old story.

Anonymous: Did you every find out if it was Gilda?

swylv: Certain commentators do say that Yocheved and Mirain were Shifra and Puah. Others make them Egyptian, this increasing the numbers in the anti-Pharoah conspiracy.

~L~ and Amie: Yes, I think that in modern times we get so caught up in the global stuff that we hear and we forget that we have power in our own lives and in those of others around us. Wendell Barry once said that there is no such thing as thinking "globally." A person can think and act effectively only on a local level. Or, as Mother Teresa once put it: If you want world peace, start at the dinner table.

I found your blog because I did a search for the song Web of Women. Haven't been able to find it anywhere, but I know it. Don't know if it's any help sans music, but here are the words:

Shiphrah and Puah ignored Pharoah's scorn
They were loving midwives, they helped life be born
Pharoah was a madman, a monster through and through
But women have the power to do what they must do

The Hebrew women in those dark years
They kept having babies, they pushed past their fears
Yocheved had a baby, Moshe was his name
And he would lead his people to freedom once again

Yocheved had a baby, she put him on the Nile
Miriam his sister watched him all the while
Till Pharoah's lovely daughter rescued him so brave
Without these holy women we might still be slaves

Shiphrah and Puah, Yocheved, Miriam
Pharoah's daughter, the list goes on and on
Long ago, as the Torah states
Women made the difference, women kept the faith