Pesach Reflections: You Shall Tell Your Child on That Day

After all the preparations, Seder day arrived.
The Seder is a Jewish teaching ritual par excellance!
We are commanded:
"You shall tell your child on that day: 'It is because of what the Eternal did for me when I went free out of Mitzrayim (Egypt)--the Narrow Places.' "

The Seder (which means "order") is modeled after a Greek Salon Dinner, except that each part of the ritual has been given Jewish meaning. It is organized in a special order that takes the participants from the degredation of slavery to Pharoah to the liberation of service to
G-d. It is done in this order so that each person who eats the Seder can say truthfully: "... when I came forth from Egypt." 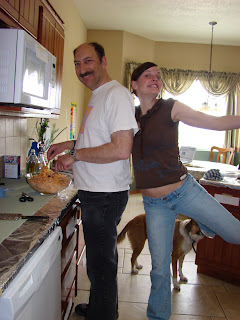 The heavy work of getting the chametz out behind us,
there are only a few little things to do to prepare for the Seder meal.

Here Bruce and the CGP cavort while preparing a vegetable kugel--a pudding in the English sense--that goes well with the turkey and brisket, being slow roasted in the oven since Friday afternoon.

This is the fun part! Family members appear out of the woodwork and take over the kitchen once the kitchen turn-over is complete.

Ever the opportunist, Lily waits at the feet of the Chefs, hoping for a dropped morsel. 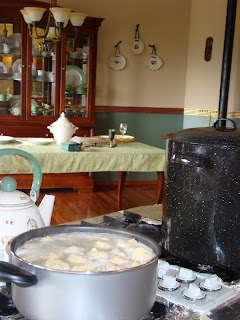 N. helped form the Matzah balls for the soup, but refused any pictures until he had put on his new shirt for Pesach.

Here, the kneidlakh are boiling away, causing good feelings for everyone. In the background, the dining table is also not yet dressed in its finery, covered with the daily tablecloth and the flotsam and jetsam of the Shabbat Kiddush (blessing over wine) and Pesach prep.

The family is off getting into nice clothes for the Seder.
We do nice clothes, but casual. This may be the Watch-night of Our People, but this is still New Mexico, where dressing for the Santa Fe Opera means ironing your jeans. 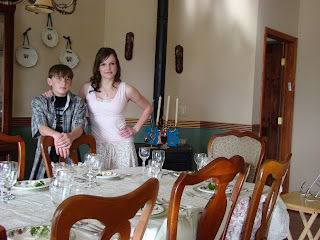 Now dressed, my children pause for a picture as they dress the table. We follow the Ashkenazi tradition of having a small plate at each place that has the boiled egg (a symbol of fertility--"...the more they were oppressed the more they increased..."), the parsley (a symbol of springtide--"Arise my beloved and come away, for lo, the winter is passed..."), the maror, which is bitter herbs ("...and they embittered their lives with hard labor..."), and the haroset, which is a sweet mixture of apples and nuts (a symbol of the mortar--"..hard labor of mortar and bricks and every kind of drudgery in the fields").
These ritual foods are eaten at appointed times during the Seder, and it is simpler to have them in front of each person than to pass them. 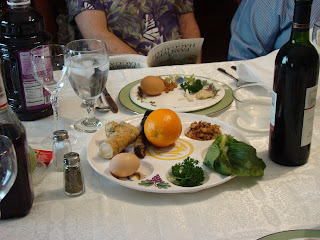 The Seder plate has from top left: haroset (mortar), hatzeret (field lettuce), karpas (parsley), baytzah (roasted egg), maror (horseradish root), and zaroah (a roasted shankbone of lamb). These symbols actually form two triangles on the plate of three on the plate. The Mi'd'aryta--"from the Torah" symbols are the roasted lamb shank (to remind us of the Pesach lamb), the roasted egg (to remind us of the Hagigah,holiday, sacrifice in the temple), and the horseraddish (to remind us of the original Pesach sacrifice in Egypt--"...with bitter herbs they shall eat it"). The other three symbols are Mi'd'rabbanan--"from the rabbis." They are the parsley ( a symbol of spring), the field greens (another kind of bitter herb to eat with the matzah), and the haroset (that symbolizes both oppression and the sweet taste of hope for liberation).

Finally, we have another Modern Interpolation, the Orange on the Seder Plate. This, the CGP says, is mi'd'rebbetzinot--from wives of rabbis. It is the symbol of the inclusion of all Jews, not just male ones, in the liberation from Egypt and the giving of Torah.

The Story of the Orange on the Seder Plate
As told by CGP, who insists on it every year 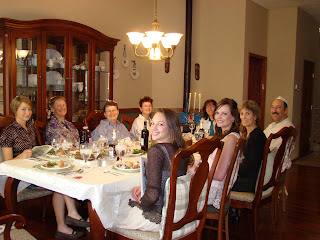 And here we are, assembled to tell again the stories of our people, ancient and modern, on this day.

It was a smaller group than last year, and quieter, too. N. graciously took a turn at the Modern Interpolation, so that I could be in the picture.

That's me, immediately to the right of the lit candles.

Each year, we all learn something new from the ancient words and the modern, as we gather to re-member how each of us came forth from Egypt.

Posted by Elisheva Hannah Levin at 11:31 AM

I loved your story about the woman and the orange. My (limited) experience of Passover has been that behind every Jewish patriarch reading the Haggadah stands a Jewish woman telling him which bits to read and which bits to leave out because the food will be ready or nobody likes them!

I get the feeling that they're all a bit more freeform than your family though. I wish you a happy, belated Passover.

Hi, Penny, and thanks for stopping by. As for how free-form it all is, I think it depends on who leads and what Haggadah is being used.
We use the beautiful Baskin Haggadah which is from the Reform Movement. It has many modernizations of its own, although the Orange on the Seder Plate is not among them. Recently, I have been leading because my Engineering Geek says I have the better singing voice--which is true, although he sings quite well. But I also know the tunes. Since I also make the Seder, I tend to not get as creative with the Seder Service due to time constraints. Our innovations come from the kids!

I always appreciate what I learn from your holiday meditations--will link.