Travelogue V: Across to Susanville


After spending two nights at R.'s little house in Medford, Oregon, we packed up Henry to travel to Susanville, California where we were to meet a realtor about land that Bruce and R. had inherited in Lassen County. The original plan had been that we would go to Oregon to meet R. and drive him down to Susanville with us to get the lay of their land. But R. is in the middle of sugery to replace the lenses in his eyes. He had the left eye done a week before we left and he will have the right eye done this very week. 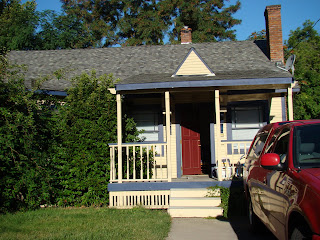 When he is done with it, he will be able to see better than anyone in the family and his life will change considerably. R. had appointments on Thursday and he also needed some help around the house. It is a small house that R. bought for a song. Built in the 1920's, it has the original built-ins and beadwork wainscotting--and hardwood floors! R. had a front porch added (pictured) and some structural work done before moving in, but much remains for when he can see well. Given the time constraints and the condition of the house, we decided we'd do better to help R. out a little with some housework. He also needed a vacuum cleaner and some other household items. So we drove him to a "club" store for those things and then we helped with some cleaning. Bruce got a little overzealous, trying R.'s patience at times--it's the sibling thing. I guess none of us ever really outgrow it! We did make a sizable dent though, and R. will be more comfortable until his eyes heal. The house is going to be a gem when R. gets done with it! 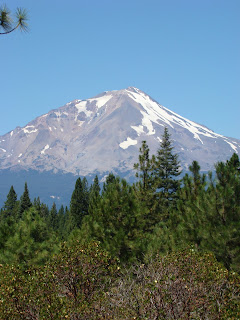 With an eye toward camping on our own land that night, Bruce and I stopped at Safeway before heading out of town. Back up, up, up out of the Oregon Valley and across to California on I-5. This time, though, we got off the interstate at the town of Mount Shasta to drive southeast to Susanville. Soon we were in the National Forest, surrounded by Ponderosa Pines and Douglas Fir. The road was relatively lightly traveled and we were able to stop to get some really good pictures of Mount Shasta as we went. I was marveling at the difference in the Alpine life zones this far north. Although our elevation was lower than where we live in New Mexico, the life zone of mixed conifer was all around us. Latitude makes a great difference and the life-zones shift down in elevation as you travel north in latitude. 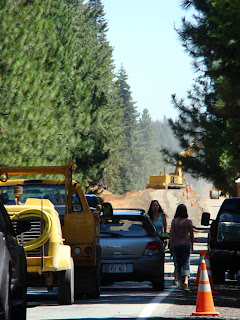 We stopped for lunch at a Mt. Shasta vista point, thinking we'd drive straight on to Susanvill without a stop. But even in the wilds of northern California, summertime is also construction season! Cal-Trans was doing a rather ambitious project to replace the road and widen one stretch. The sign said that the stop time could be up to half-an-hour. So as more and more cars lined up to wait for our turn to be taken through the mess, people got out of their cars to use the conveniently placed facility and enjoy the green shade of the trees, feel the cool breeze and smell the fresh oxygen wafting across the forest. We realized that we were not going to make Susanville by mid-afternoon, and so what? We shrugged and laughed and decided to enjoy the forest.


After a while, the pilot vehicle appeared and a prodigious line of cars, lumber trucks and construction vehicles passed by. Then it was our turn to follow the pilot through the maze of stabilized dirt road, twisting and turning past men and women in hard hats, surveying stakes, and heavy equipment. I was happy that we were driving Henry! 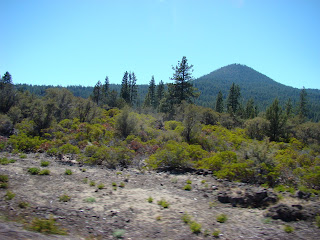 The construction past, we found ourselves in the Lassen volcanic field, the southernmost part of the High Cascades. Mount Lassen stands within the collapse caldera of a larger volcano, Tehama, that 450,000 years ago, stood within the even larger caldera of the massive volcano Maidu. Tehama was at least as large as Mount Shasta is at present, and Maidu, which preceded it by hundreds of thousands of years, was truly a giant! Mount Lassen is an active volcano and last erupted in 1915. Lava flows and ash and mud slides from that eruption are still raw and obvious, and I took this picture as we rounded Lassen's northwest flank. The growth on the ash and lava shows the succession from pioneer species to more stable stages, however the mature forest has not yet appeared. One can see the boundaries of the flows from far away, by noting where the shrub and tangle give way to mature forest. 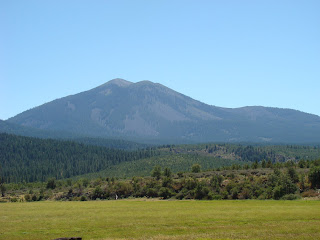 As we rounded Mount Lassen, we came into Lassen county, and after winding across the volcanic terrain, we descended to Susanville, which lies between the High Cascades and the Basin and Range.

When we met with the realtor, we found out that our land was about an hour north in Madeline, California. Had we realized that, we could have driven from Medford through Klamath Falls, Oregon and come right by it! We also found out that the land in that area had not appreciated in value much since 1969, although sooner or later it probably will, being about two-and-a-half hours from Reno. The realtor advised that we visit the Lassen County Development Office to find out about zoning and restrictions. It was clear we were not going to see our land that day! 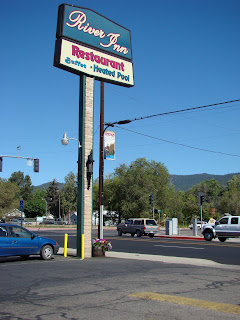 Instead of camping on our land, we checked into the River Inn, a small motel near the middle of town. It was an old motel, but very comfortable. While Bruce took a nap, I downloaded pictures and discovered that I had internet access--even in a small town on the road to nowhere! After we had our picnic supper in our room--cold fried chicken, cole slaw, potato salad and Mandarin Lime sodas--we went out looking for ice cream. And the manager of the motel turned out to be a wealth of information about the area where our land is located. "It is the most beautiful place I have ever seen," he told us. "Really dark at night so you can see the stars. It is a plain surrounded on three sides by mountains. There is nobody there. It is definitely worth keeping." Bruce and Dave discussed putting up a Yurt, using solar and wind power to stay off-grid, and running a camp for astronomers in the summer.

Our visit to the county the next morning got us information on the zoning--rural, agricultural, residential. And the county planner also enthused about the beauty of the Madeline Plain. "You gotta see it!" he said, repeatedly. He was planning to buy a piece and put up--you guessed it--a Yurt, live off the grid and hunt and fish to his heart's content.

We decided that it was not a good time to sell the land and that we ought to see it on another trip. In the meantime, the realtor, Elizabeth, would check to see if we could lease it out for agricultural use.

All in all, it was a productive visit to Susanville even if we didn't get to camp on our own land--this time!
Posted by Elisheva Hannah Levin at 12:07 PM

Email ThisBlogThis!Share to TwitterShare to FacebookShare to Pinterest
Labels: On the Road, Travel