Tonight at 23:08 MST (06:08 UT), the earth will be at the point of the Winter Solstice for the northern hemisphere. So today is the Solstice for us, although for those of you east of us, the Solstice is tomorrow very early in the morning. 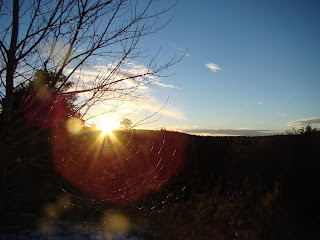 I took the picture to the right last night, December 20, at approximately 4:41PM. I got out to get a shot of the sunset from a fixed point on my back porch last night, because we already had a winter storm warning posted for today. This is so close to the southernmost point of sunset on the western horizon, that I doubt there would be much difference even if I could take the picture tonight. And I can't, as we shall see. 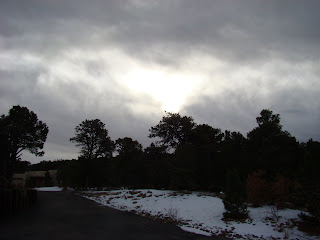 Here is the best picture I could get of the sunrise this morning. Sunlight can be seen through the thinning in the clouds just above the tree at right center of the picture.
The weather front was already moving in.

Astronomically, the winter Solstice is the time at which the hemisphere experiencing winter is at maximum tilt away from the sun, so that the sun sets directly overhead 23 degrees 27 minutes away from the equator. In our case, winter in the northern hemisphere, the sun sets directly overhead tonight on the Tropic of Capricorn, 23 degrees 27 minutes south of the equator. 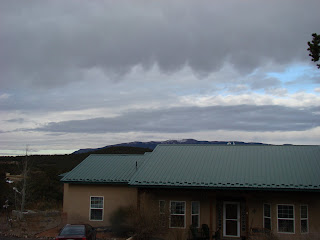 I took this picture this morning as we returned from our walk with the dogs. The lowering clouds just over the roof of the house mark the back of the warm air mass bringing moisture from the Pacific. The edge of the clouds just over the mountains represent a cold front swinging down from the northwest. When these two air masses mix over the mountains later today, we will get snow. We are expecting a white solstice, just like last year.


In the modern calendar, the winter solstice is marked as the beginning of astronomical winter. Meteorological winter began on December 1. In the old calendar, the winter solstice is marked as a celebration of midwinter or Yule, because the beginning of winter comes at the fall cross-quarter day, near the beginning of November. The Romans celebrated this day as Dies Natalis Invicti Solis--the Birthday of the Unconquerable Sun. Christmas was set at this time in the 3rd century CE. There are many, many holidays in the northern hemisphere that in one way or another, celebrate the birth of light in the midst of darkness. Tonight is the longest night of the year, and today is the shortest day. After tonight, the daylight time will become longer each day. This will happen slowly and unnoticibly at first, but as we come past the spring cross-quarter day, we will notice the difference. This is why, now, in the long dark night of winter, we celebrate in many different ways, the birth of light.


There is no Jewish Holiday that specifically marks the Solstice, however, Hannukah, the Festival of Light, always comes at the dark of the moon that comes before of on the Solstice. 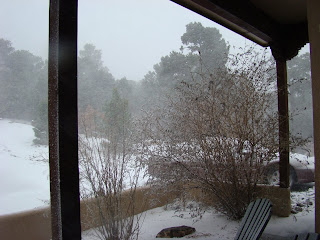 This picture was taken about 20 minutes after the snow began falling this afternoon. N. and I headed into town at about 10:30 this morning. At that time, the sun was shining in a partly cloudy sky and the temperature at the house was 39 degrees. We had several errands in town, to get dogfood, to stop at a big box store to get a new storage container for dogfood, then the bookstore for my favorite holiday blend coffee, and then to pick up some Challah for Shabbat tonight. 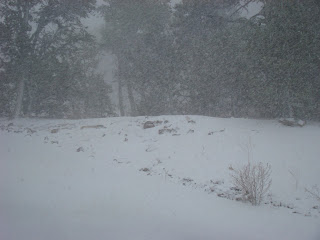 This picture was taken about 15 minutes after the picture above. In Albuquerque at noon, it was sunny and 50 degrees. But by the time we got to the bookstore, the Sandia front was swathed in clouds. N. and I made an executive decision to go to the natural food store next to the booksstore to get our Challah. It was very crowded in the food store, and it took us about a half-hour there. It was 2:25 by the time we were driving in rain on Tramway Road, heading for the canyon and home. It started to snow as we left Tijeras, heading uphill for Zuxax. At Sedillo hill, the flakes were smaller and falling faster. The temperature when we got home was 35 degrees. By the time we got the truck unloaded, it was blizzard conditions, and since the start of the storm (1.5 hours ago), we have gotten about 2.5 inches of snow. The wind is wild. We can expect from 5 to 7 inches of snow overnight, and more tomorrow morning. The temperature here is now about 28 degrees and falling.


We are getting ready to light the candles for Shabbat, and I will light an extra one in honor of the longest night of the year. We are snowbound this Solstice, which seems right for Midwinter's Night.

Happy Solstice! Happy New Year!
May the growing light be reflected in your homes!

Happy Yule! May the coming holidays be ones of warmth and joy for all.

I've been having fun watching the weather patterns move across the blogs I read. Your precipitation seems to hit us (in southwest KS)within a day or two. Your winter storm got here at about 3:00am this morning (12/22) -- I woke in the night to the wind blowing hard, and this morning we have about 3 inches of snow with high drifts.

I'm enjoying these winter solstice .... you make it sound so unevil and more informative. Thanks

I wanted to watch Ushpizin today but netflix can't get it here until tomorrow...sigh

Rebecca: I watch the storms move from here on to the midwest via blogs. And of course, some of the midwestern storms come from further north, and we miss them entirely! :)

swylv: I am not sure I follow why the solstice would be evil. It is simply the date at which the sunrise and/or sunset seems to be in the same place three days in a row. Thus the word sol (sun)-stice (stand still)--from the Latin. It is a physical phenomenon caused by the tilt of the earth's axis by 23 degrees 27 minutes from the vertical. This is what causes the seasons. People everywhere find the changing seasons important for agricultural reasons. In the past, they had to know when to plant and when to prepare for winter. So the solstices (summer and winter), the equinoxes (spring and fall), and the cross-quarter days (halfway between each solstice and equinox), are important markers for the development of calendars.

There is a great activity in How the Universe Works where you can use a globe, a light source and flags to teach an understanding of how the seasons work. This book is a good one for teaching the science of astronomy to kids between the ages of 8 and 12.