Hannukah by the Numbers 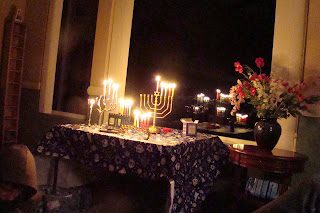 FOURTH.
Friday night was the 4th night of Hannukah and Shabbat. It was a quiet night.
First we lit the Hannukah candles. Next, after enjoying the increasing light, we lit the Shabbat candles. A relaxing dinner. A quiet walk with the dogs. Early to bed.

But we also put the brisket in the oven, a slow roast, to prepare for Saturday night. 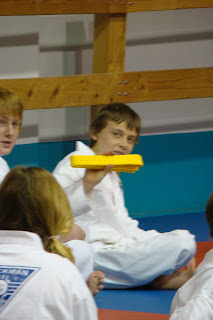 ELEVENTH.
Saturday afternoon at the Dojang.

A very special graduation ceremony for N. His first belt advancement for Taekwando.

Six weeks of hard work, and lots of driving on my part, and N. successfully tested into the rank of Eleventh Gup, Yellow Belt.

A lovely ceremony in which the students honored what the old belt meant and honored the new belt. 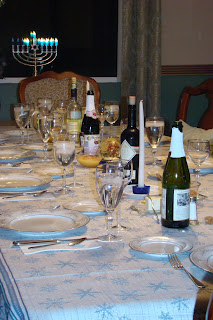 FIFTH.
Last night was the fifth night of Hannukah.
The light has expanded to the left side of the menorah.
And the table is set for our annual family and then some Hannukah Latke feast and party.

I got out the good china, the crystal and opened a bottle of Chilean wine I received as a Hannukah gift last year. We fried latkes to go with the brisket and carrots, and got out the applesauce.

TEN.
The table was set for ten people, four who live here, five who drove up to be with us, and one who had to work, but was with us in spirit. 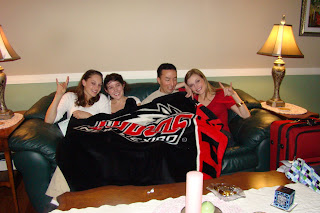 Everyone's a Lobo! Woof, woof, woof!
Three UNM students and one alum snuggle under a new Lobo blanket on the couch. L. is my daughter of the heart, J. is my Holiday child, A. is MLC's young man, and MLC herself, in the red shirt. 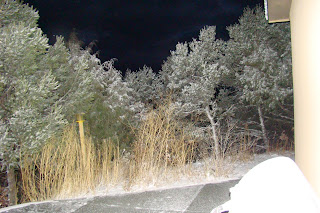 It began to snow while we were eating the Hannukah feast.

Six tenths of the total precipitation fell as rain in the early evening ahead of the snow. But nobody got up to look out of the window until the snow began to fall.

Then, one after another, all of us found an excuse to pass by the window and check it out. 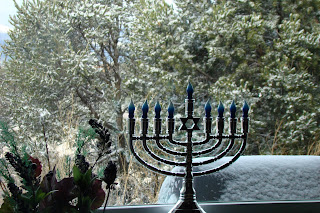 Morning on the fifth day of Hannukah.
We got one inch of snow overnight.
The pinyon and juniper outside the window sport new, white trim.

You know, it snowed on the 5th day of Hannukah last year, too!
That's Hannukah by the numbers!

Chag Sameach!
Posted by Elisheva Hannah Levin at 11:35 AM

I live and learn.
Best wishes

This is my calling card or link"Whittereronautism"until blogger comments get themselves sorted out.

Congrats to N on his yellow belt!

Lovely pictures, especially the picture of the Menorah by the window.

Congratulations to N! Quite an accomplishment!

Your table is so pretty. We've been using our dining room for dinner this month (normally we eat all our meals in the kitchen), and I've noticed that a pretty table makes our regular old meals taste so much better.

I hope your team won!

I love the menorah by the window with the snow and trees out the window. lovely

It's been a pretty nice Hannukah, so far, despite being in the midst of things.

And the snow is a bonus!

Some interesting parallels between our two families:

We've had sprinkles of snow this Chanukah though, sadly, nothing stayed around.

We spent much of Saturday at our boy's TKD promotion as well--the boy now has his yellow stripe!

And I completely understand trying to celebrate Chanukah at the end of the school term when there is just so much left to do. What a blessing it is to have that work-free time while the candles burn. It makes me want to spring for the spendier tall candles :-)

I hope you and yours find lots fo light in the remaining days.....